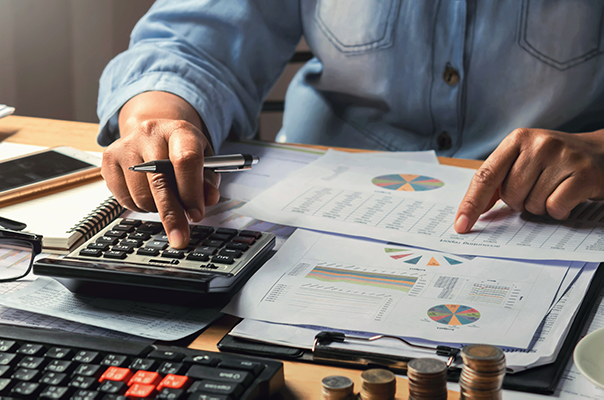 In recent years, the way that official development assistance (ODA) loans have been measured has changed. Previously, the face value of such loans was recorded, and subsequent payments subtracted. Now, the “grant equivalent” is recorded instead: essentially a measure of how much the loan is subsidised. To calculate the grant equivalent, it is essential to set “discount rates.” These rates are intended to simulate commercial rates and are used to discount future payments into the present value; if the interest rate charged is lower than the discount rate used, then the loan is at least partly concessional.

This makes the setting of discount rates important for determining not just how much ODA should be scored for a loan, but whether or not it even is ODA (as to count, the concessional element must be above a certain threshold). Ideally, they should reflect the level of risk associated with lending. However, based on past data, this blog suggests that the current discount rates appear to greatly exaggerate the risk associated with ODA loans. Whereas on average, donors only lose around 0.3 percent and 0.1 percent of their capital lending to lower-and upper middle-income countries respectively, DAC discount rates imply a risk an order of magnitude higher. This note explores what happens to the value of ODA loans if more realistic discount rates are chosen. In short, the value of ODA loans falls by over a half.

How were the current rates set?

When the OECD’s Development Assistance Committee (DAC) set the discount rates, they began with a “base rate” of 5 percent—equal to the IMF discount rate—and then added a risk-premium on top of this, which differs by income group. Lending to low income or least developed countries (henceforth LDCs) is deemed riskiest, and a 4 percent risk premium is added for these countries. For lower-middle-income (LMICs) and upper-middle-income countries (UMICs), the premiums are 2 percent and 1 percent, respectively. The discount rates used are therefore 9, 7, and 6 percent. The DAC communique introducing this method in 2014 states that the discount rates will be “regularly reviewed… reflecting emerging experience with risk;” sensible given that none of the “ingredients” for the discount rate are static.

However, there is already some data that could have informed the decision of where to set discount rates. As part of the Creditor Reporting System dataset (CRS) produced by the DAC, there are series on the total value of ODA debt forgiven each year, and total debt outstanding. The ratio between these series provides a rough indication of the level of risk. How well do these discount rates reflect the actual risk of lending to different income groups?

What do the current rates imply about risk?

What the discount rate implies about risk depends on the (hypothetical) risk-free rate: the interest rate you can obtain on saving/lending and be certain that you’ll be repaid in full (obviously no lending is entirely risk-free, but it’s a useful reference point). The implied default risk can be thought of as the probability of default that would yield the same expected value as a loan at the risk-free rate. For example, if r* is the risk-free rate, then lending for one year at r* has a certain return of (1+r*). Lending at a higher rate (r) would have the same expected return only if there is a probability (p) of default:

Rearranging, the above equality holds when the probability of default (p) is equal to:

For example, if you assume that the risk-free rate is 5 percent, then lending at 9 percent implies that there is an annual default risk of 1 - 1.05/1.09 = 3.7 percent. Clearly, this calculation depends on what we take to be the risk-free rate. Intuitively (and very roughly speaking) for any interest rate, some proportion can be seen as compensating lenders for the risk of lending, and some proportion can be seen as capturing everything else (inflation, time-preference, etc.). Assuming a higher risk-free rate is therefore tantamount to assuming that more of the interest charged accounts for inflation etc, and less accounts for risk: in other words, that the implied risk is lower.

Lending at below the DAC discount rates is judged to be concessional (as it doesn’t fully compensate donors for risk) and so by specifying a risk-free rate, we can use the formula to see what risk the discount rate implies. To begin with, assume the risk-free rate is 5 percent (this is the IMF base rate that the DAC used in formulating the discount rates, on top of which risk-premia were added). This implies default risk of 3.7 percent, 1.9 percent and 0.9 percent respectively for LDCs, LMICs, and UMICs (table 1, column 3).

What does the data say?

How does this compare to the actual data? Figure 1 compares the average percent of debt forgiven by income group, between 2003 and 2018, and the implied default risks calculated using a risk-free rate of 5 percent. We use this period as data before 2003 is less reliable. However, data from DAC tables (which go back further than the CRS dataset but lacks the necessary detail for these calculations) suggests that the value of debt forgiven before this period tended to be lower, even in constant 2018 prices. (Also, these calculations use the income group at the time of default, rather than at time of loan issuance, as the data on the latter is unavailable. The same calculations with historic DAC income classifications suggests this doesn’t change the overall picture, and reinforces the points below). 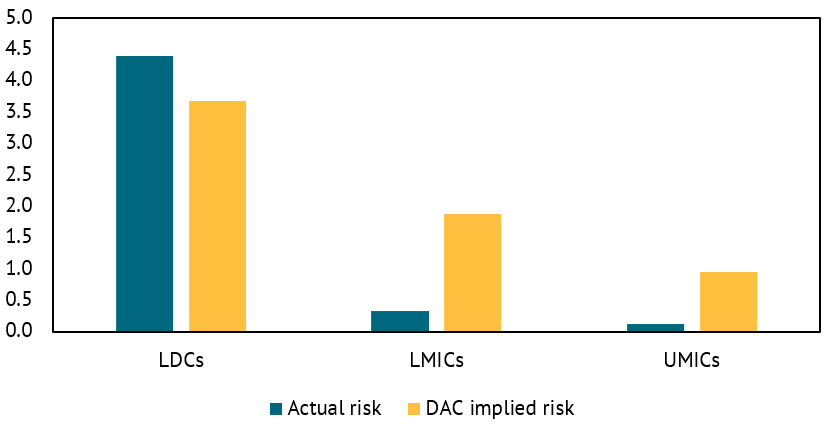 For LDCs/LICs, the actual, realised risk between 2003 and 2018 was slightly higher: on average 4.4 percent of outstanding debt was forgiven, whereas the implied default risk was only 3.7 percent. However, the case is different for middle-income countries. Over the same period, on average only 0.3 percent of ODA debt owed by LMICs was forgiven, and only 0.1 percent of debt owed by UMICs. These figures are about an order of magnitude lower than the risk implied by the discount rates, or 1.9 percent and 0.9 percent for LMICs and UMICs respectively. In other words, the DAC is implicitly assuming that lending to middle-income countries is far riskier than is actually the case.

The above chart assumes that the risk free rate is 5 percent, as this is the “base-rate” taken by the DAC. But using a more realistic (lower) risk-free rate would mean that the DAC discount rates exaggerate risk even more. In the current low interest rate environment, it is clearly not possible to lend risk-free at 5 percent (and the IMF unified discount rate was not intended to represent a risk-free rate). Interest rates in most major economies are near zero, and even sometimes below. Investors who are effectively paying the Japanese government to look after their money would presumably be very disappointed to learn that they could have earned 5 percent at no risk. Figure 2, and column 4 of table 1, therefore assumes a more realistic risk-free rate. It would be reasonable to assume a rate of zero, but to produce a more conservative estimate of the risk implied by the DAC discount rates, the graph assumes (arbitrarily) a rate of 2 percent. 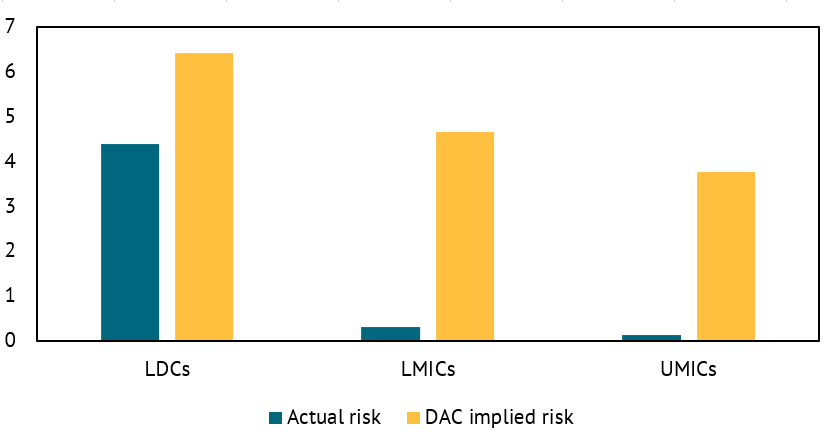 Now, even for LDCs, the implied risk is nearly 50 percent higher than the realized risk over 2003-2018, at 6.4 percent. For middle-income countries, the level of risk implied is simply not credible. Compared to a realized risk of 0.3 percent and 0.1 percent respectively for LMICs and UMICs, the DAC discount rates imply risks of 4.7 percent and 3.8 percent, when assuming a risk-free rate of 2 percent (which is still quite high). Importantly, the majority of loans disbursed in the past few years have been to middle-income countries (around 85 percent in 2018), so even though the implied risk for LDCs looks considerably more reasonable, this is also less relevant.

What does this imply for ODA?

As a measure of risk associated with lending, the DAC discount rates appear much higher than appears warranted judging by past data, and this implies that the value of ODA loans has been exaggerated. Figure 3 explores what difference this might have made, by estimating what the grant equivalent of ODA loans would have been with a more realistic set of discount rates, and plotting this against the actual grant equivalent of loans recorded by the OECD. For the new discount rates, the realized risk calculated above is used, plus 2 percent (to be conservative in estimating risk assumed by DAC). In addition, the graph also shows an estimate of the grant equivalent of loans using the DAC discount rates. There are a few simplifications which mean that this estimate doesn’t recreate the DAC figures exactly (for example, in calculating the loan period we’ve just used the years of repayments, rather than the exact dates). But plotted against the official figures, the estimate is very close, and demonstrates that the difference between the blue and teal lines is caused by the discount rates used, not errors in calculation or simplifications. 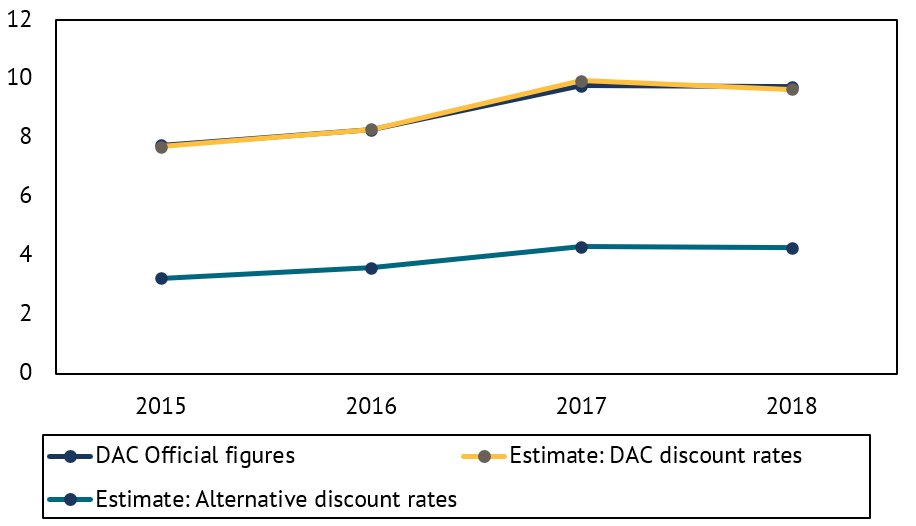 In each year, the grant equivalent based on more realistic discount rates is less than half that currently reported. In 2018, whereas the DAC reports that the grant equivalent of bilateral ODA loan is around $9 billion, the alternative set of discount rates imply a value of around $4 billion. The percentage of outstanding debt forgiven each year may not be a perfect measure of risk, and it is true that market rates for lending to most developing countries are much higher than  the alternative rates we use based on past forgiveness. But the grant equivalent measurement system is supposed to better reflect donor effort, and arguably this is better measured by looking at past fiscal sacrifices donors have made, compared to the arbitrary rates currently used (it is not clear why the IMF discount rate is an appropriate base rate, and nor do the risk premia seem to be informed by anything).

Time to revise the discount rates?

As noted above, the DAC has indicated they would monitor the use of discount rates and revise in light of new information. Five years after their introduction, the (preliminary) examination of the risk of ODA lending presented in this blog suggests that currently, the true value of ODA loans may be less than half of the value reported. It is true that there are mounting concerns about another debt crisis in the wake of the coronavirus pandemic, and this might lead to a greater proportion of ODA debt being forgiven. But the data available to date - which include the large-scale debt relief of the mid-2000s - suggests that the discount rates overstate risk. In fact, the IMF discount rate which is used as the basis of the DAC discount rates, is what the IMF use to calculate the grant element of loans to LDCs, so it is unclear why the DAC have added an extra risk margin on top of this, even for MICs (even on its own terms the DAC is out of date: recalculating the IMF discount rate based on more recent data suggests it would be a percentage-point lower).

As a result, it is likely that many observers of the “modernisation of ODA” would welcome such a revision coming sooner, rather than later.

The author is grateful for valuable comments from Ian Mitchell, but remains responsible for any errors. The data are available here.