A Step Closer to Regional Compact Authority for MCC

This week, the Millennium Challenge Corporation (MCC) edged one step closer to securing new authorities that would better position the agency to undertake regional programming. On Wednesday, the House approved the AGOA and MCA Modernization Act (H.R. 3445), sponsored by House Foreign Affairs Committee Chairman Ed Royce (R-CA), which would authorize MCC to pursue concurrent compacts with a single country—allowing for one with the traditional, bilateral focus and one that is regional in nature. House passage tees up the bill for action in the Senate, where the Foreign Relations Committee greenlit a companion measure in October.

Similar provisions were included in fully five bills in the 114th Congress, but none made it over the finish line. Hopefully 2018 will be the year.

Why should MCC focus regionally?

MCC’s singular mission is to reduce poverty through economic growth—and important constraints to growth can be cross-border in nature. MCC also works in regions—like sub-Saharan Africa—that contain many small economies and fragmented markets. In such contexts, some of the highest returns come from facilitating regional connections.

Because MCC can only form bilateral agreements, the agency hasn’t been able to exploit potentially high-return regional opportunities, even though a number of MCC projects in sectors like infrastructure and energy have an inherent regional component. For instance, in a number of early compacts—Tanzania, Honduras, and Nicaragua—MCC rehabilitated roads up to a national border and then stopped.

Regional and Sub-National Compact Considerations for the Millennium Challenge Corporation
MCC Testimony: Lessons Learned after a Decade and Outlook for the Future

In recent years, MCC has done more to incorporate regional considerations into its bilateral compact development processes, but its ability to address key regional constraints to growth remains limited.

Why is concurrent compact authority important?

Currently, MCC can have just one compact at a time per eligible country. So even where MCC partner countries are adjacent to one another—and have cross-border issues that hamper greater economic activity—the agency hasn’t been able to coordinate programming among them effectively since countries are rarely at the same stage of eligibility or program design at the same time. Consider West Africa. The map below suggests there may be some prospects for regional integration. But because programs began development at different times, the agency was unable to build in a regional lens from the outset. 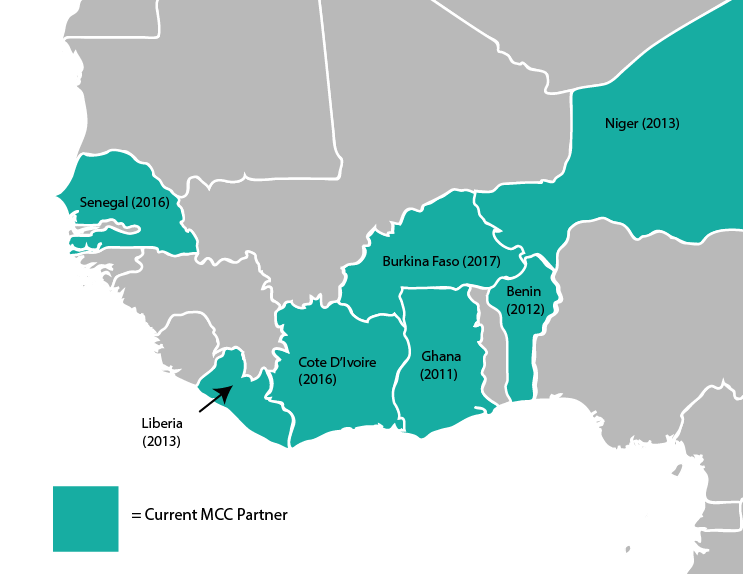 With concurrent compact authority, MCC could pursue a regionally focused investment while still advancing separate bilateral programs with one or more of the participating countries on their own timelines.

If MCC does receive authority to pursue concurrent compacts, how should the agency approach regional engagement?

Regional programs are much more complex than bilateral programs, often take longer, and can carry more risk. There will be operational challenges as well, in terms of figuring out how to define regions, how to deal with suspension or termination of individual parties, how to design a multiparty implementation unit, and how to structure incentives across multiple parties when costs and gains are unlikely to be equally shared. These challenges are not insurmountable and should not preclude MCC from the opportunity to expand its impact and generate greater economic returns. In fact, as CGD’s Nancy Birdsall pointed out, MCC has some advantages over other funders of large, cross-border investments. What the list of challenges does suggest is that, if given the opportunity to pursue concurrent compacts, MCC should reiterate its pledge to move slowly and cautiously (e.g., starting with an initial pilot) and reaffirm its long-held commitment to measuring results and learning from the process.

Blog Post
A Hot Topic: The Role of US Development Assistance in...
Jocilyn Estes and Sarah Rose