Last week the Asian Infrastructure Investment Bank’s (AIIB) board of directors approved financing for three projects, including, for the first time, a project in China. Looking back at AIIB operations to date, these are my three takeaways.

1. AIIB financing is not crowding out financing from the traditional multilateral development banks, such as the World Bank and the Asian Development Bank.

Since it was established, the AIIB has approved financial commitments totaling US$4.3 billion to projects in 12 countries, with US$150 million of that committed to a regional infrastructure fund. Over the same period in the same countries, the World Bank (IBRD and IDA) approved US$16.3 billion in financing and the Asian Development Bank (ADB) US$14.8 billion. Given that the AIIB focuses solely on infrastructure financing, a fairer comparison might be to World Bank and ADB loans for infrastructure projects. By my estimate, the total amount of World Bank/ADB infrastructure loans was US$16 billion, not including the International Finance Corporation (IFC).

The following chart shows the value of all financial commitments from each of the three institutions for each of the 12 countries since June 2016: 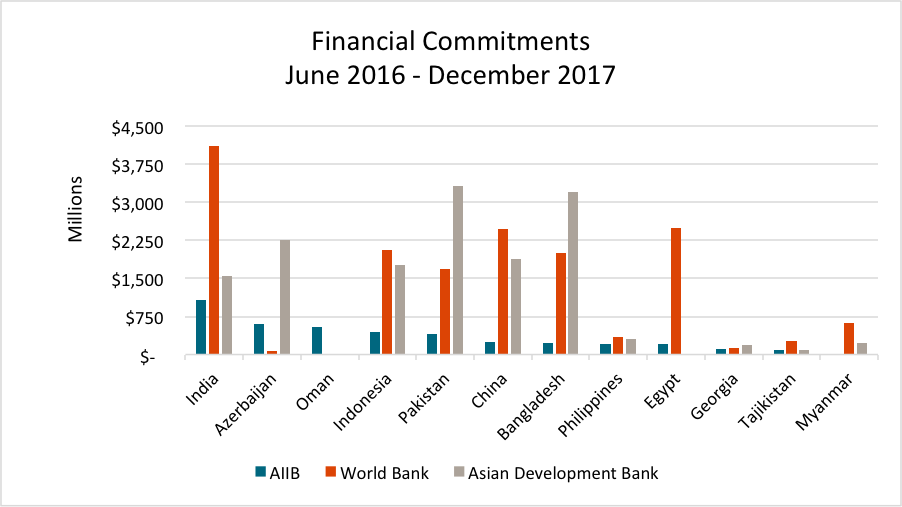 India has the highest level of AIIB financing, at just over US$1 billion, but this is roughly one-quarter of the amount of World Bank lending (not including the IFC). Azerbaijan is second with US$600 million in financing, though this is for just one project, the Trans Anatolian Natural Gas Pipeline. By contrast, the Asian Development Bank approved a total of US$2.25 billion in financing for six different projects in Azerbaijan over the same period.

2. AIIB is succeeding by co-financing with other multilateral development institutions.

Of the 24 projects that have been approved by the AIIB board, 17 have been co-financed by another multilateral development institution. The World Bank Group (including IFC) has committed funding for 11 AIIB-financed projects, the Asian Development Bank five, and the EBRD and EIB two each. Of the seven projects that are not co-financed by another multilateral, three are in Oman, which does not borrow from any of the traditional MDBs. The chart below shows the total value of AIIB financial commitments for 2016 and 2017, the amount of financing from other sources, and the total value of the projects financed.

The co-financing model serves AIIB well, particularly if other institutions, such as the World Bank and Asian Development Bank, do not charge the AIIB all the costs they incur for due diligence and oversight. With low-cost co-financing fees, the AIIB can make significant profits since its own loan charges can easily cover its low administrative expenses. The other institutions, with their full suite of safeguard policies, also protect the AIIB from reputational risks associated with infrastructure projects.

3. AIIB will finance projects in countries that other development institutions shy away from.

As mentioned above, the AIIB has financed projects in Oman, a country on the Arabian Peninsula with a per capita income well above the World Bank’s graduation threshold. Unlike the World Bank, the AIIB has no graduation policy and is demonstrating a willingness to finance infrastructure in any country as long as the project meets the purposes of the bank, namely to foster sustainable economic development, create wealth, improve infrastructure connectivity, and promote regional cooperation and partnership in Asia. In this sense, it works more as a pure credit cooperative, like the European Investment Bank, than a traditional development institution.

This raises the prospect of financing for projects in two member countries that are currently pariahs in the traditional MDBs:

AIIB's approach also raises the prospect of a significant increase in lending to China itself. As mentioned, the AIIB board approved financing for a project in China this past week. The US$250 million loan will support efforts to reduce coal use in the Beijing region by connecting over 200,000 households to the natural gas distribution network. Opportunities abound for other infrastructure projects within China, whether that be for pollution control or other needs, including the Belt and Road Initiative.

AIIB financing for projects in China may also be boosted by the US administration’s advocacy for a more rigorous application of country graduation at the multilateral development banks, particularly the World Bank. In his recent testimony to Congress, Treasury Under Secretary for International Affairs David Malpass conveyed concern that the World Bank is seeking to maintain or increase its strong engagement with graduation-eligible countries, citing China as a prominent example. As my colleague Scott Morris pointed out in a recent blog, if the United States is successful on World Bank country graduation, then countries such as China could increasingly turn to the AIIB, an institution led by the Chinese and over which the United States has absolutely no influence.

With US$4 billion of projects in the portfolio and another US$1.5-2 billion in the pipeline, the AIIB is well on its way to becoming a thriving member of the international financial community—and one that is likely to be increasingly called upon to meet the financing needs of emerging and frontier market economies. It is too soon to say if it will meet its goal of approving US$15 billion in financing in 2020, and much will depend on world economic conditions and project-specific circumstances. However, if current projections hold, and the traditional MDBs remain capital constrained, the AIIB should see plenty of demand for financing in the road ahead.