Airlines and Forests: A Match Made at Cruising Altitude | Center for Global Development | Ideas to Action Skip to main content

Airlines and Forests: A Match Made at Cruising Altitude

by
Jonah Busch
September 19, 2016
In what could be the most consequential meeting on climate change in 2016, the world’s airlines are gathering next week in Montreal for the 39th triennial assembly of the International Civil Aviation Organization (ICAO). There they will consider a proposal to cap carbon dioxide emissions from international flights and let participating airlines trade the rights to emit. An ICAO-sanctioned cap-and-trade program could lead to airlines achieving their goal in part by buying credits for the protection of tropical forests.

Coupling airlines and forests would be a match made at cruising altitude. Airlines will need lots of emission reductions to meet their goal of growing business without growing emissions. Meanwhile, tropical forest protection offers a big and affordable potential source of emission reductions, but requires large and reliable funding, as Frances Seymour and I describe in our forthcoming book, Why Forests? Why Now? The Science, Economics, and Politics of Tropical Forests and Climate Change. Indeed, as described below, airlines could make the growth in international flights carbon neutral for 20 years by paying for just a 10 percent reduction in future emissions from tropical deforestation.

The vast bulk of climate emissions are dealt with internationally through the United Nations Framework Convention on Climate Change (UNFCCC), through which the Paris Agreement on climate was successfully agreed last year, and through which voluntary national climate pledges were made. However, a few other international forums handle for greenhouse gas emissions too. The International Maritime Organization are responsible for emissions from international shipping; the Montreal Protocol takes care of CFCs and HFCs. And ICAO, a consortium of national governments and airlines, is responsible for emissions from international flights (domestic flights are covered by countries’ commitments through the UNFCCC). 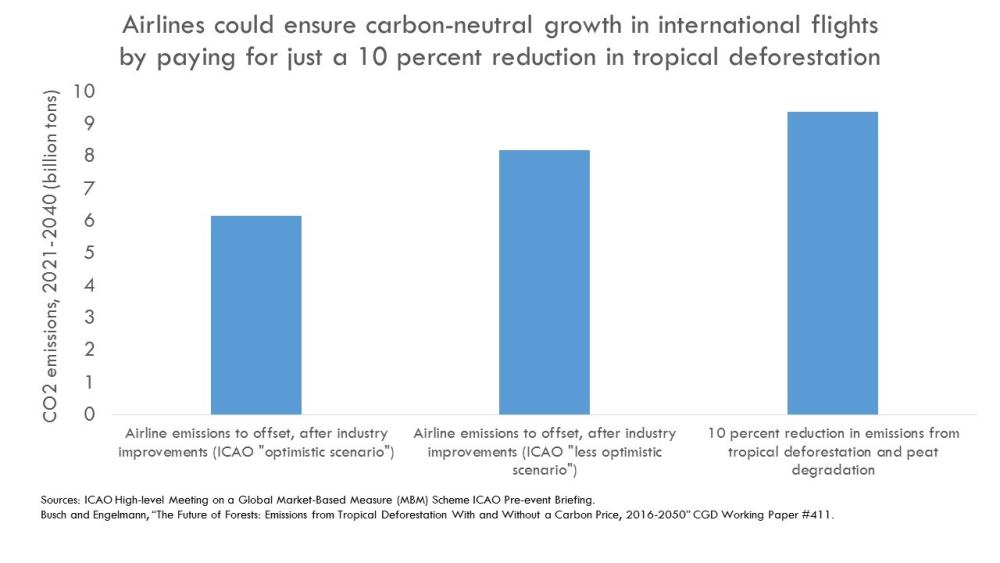 International flights currently produce around 2 percent of all greenhouse gas emissions, but the International Energy Agency has projected these emissions will more than triple by 2050. ICAO set an aspirational goal back in 2010, reiterated in 2013, to cap future emissions after 2020, with “carbon neutral growth” from then onward. This means that between 2020 and 2040, by ICAO’s estimates, the industry would need to prevent the release of around 10 billion tons of carbon dioxide—roughly the amount emitted by Australia over the last 20 years. Now ICAO is discussing how to meet that target.

Greenhouse gas emissions harm everyone, but they harm the world’s poorest people first and worst. Here’s how airlines meeting in Montreal can do their part for a stable climate:

Forests are a great match for airlines, but airlines are a great match for forests too. Previous REDD+ initiatives have yet to generate the large, predictable demand for protecting forests that tropical countries are craving. Bilateral deals between Norway and Brazil, Guyana, and Indonesia have successfully established proof of concept in paying for reduced emission reductions; the Carbon Fund may also do so soon while the Green Climate Fund may do so eventually. But these publicly funded programs are fundamentally limited by aid levels and conditionalities, as described in the CGD working group report Look to the Forests. California’s cap-and-trade program, if it accepts tropical forest credits, is vitally important for setting high standards for regulatory offsets, and could grow to include other states such as Quebec and Ontario, but is not expected to produce large demand initially.

ICAO, on the other hand, has the potential to bring large and predictable funding for forest protection. If airlines purchased REDD+ credits to cover half their 2021-2040 gap, at a modest price of $5 per ton, it would provide countries that reduce deforestation with more than $1.5 billion annually—substantially more than the $1 billion or so currently going toward REDD+ every year. If airlines paid $10 per ton to cover their entire gap, forested countries would receive in excess of $6 billion a year.

An alliance between airlines and tropical forests has vast potential to protect the climate—ICAO should signal all clear for takeoff.