There’s a lot to like about the climate pledges that nearly 150 countries have now submitted to the United Nations in advance of the climate summit in Paris in December.  I’ve grouped them into seven storylines that I think deserve attention:

1. Countries are going on record. Unlike the top-down Kyoto Protocol, the Paris climate summit is built around voluntary bottom-up pledges.  By transparently putting their pledges on record, countries are making it easier to document progress and harder to backslide on commitments. More than 60 developing countries submitted pledges last week ahead of a United Nations Framework Convention on Climate Change (UNFCCC) deadline. (The deadline for developed countries was back in March.) Read all the pledges on the UNFCCC portal, or skim a handy roundup of highlights from each country by Carbon Brief.

2. Everybody’s in. Almost*. The Kyoto Protocol required climate actions only from the rich countries most responsible for climate change historically. This time, everyone’s putting something on the table (Figure 1). Countries that have submitted pledges are collectively responsible for 90% of greenhouse gas emissions.  Full participation in global climate action inspires a race to the top.  For years segments of the US Congress resisted taking action on climate under the premise that China and India weren’t acting either.  Now having all major emitters on board kicks the legs out from under that argument.

*Notable holdouts include countries from the Organization of Petroleum Exporting Countries (OPEC) and the Bolivarian Alliance (ALBA). 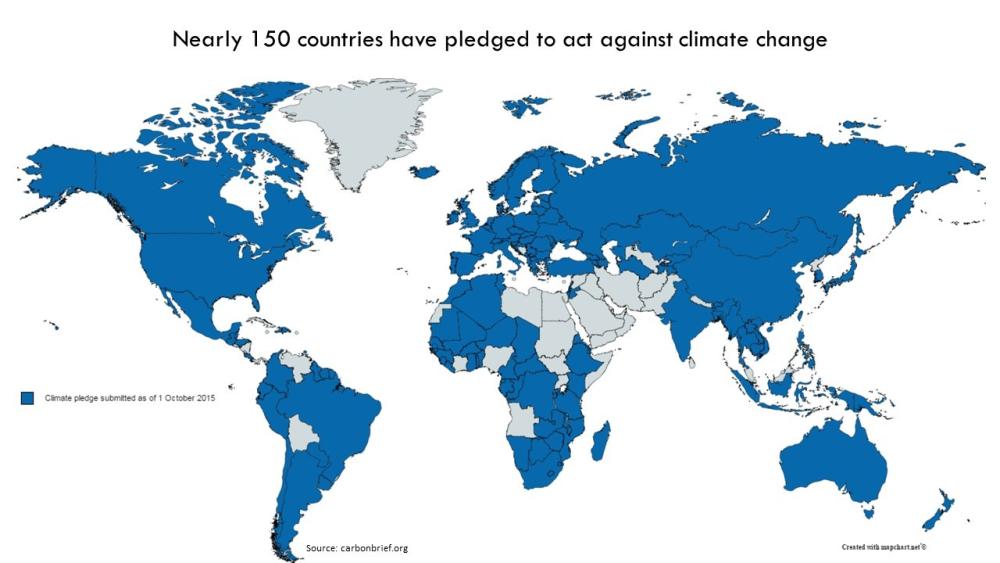 3. Pledges get us halfway. While many of the individual pledges are politically ambitious, collectively they are inadequate to keep the atmosphere from warming to dangerous levels. A dangerously warm climate is awful for the rich, but catastrophic for the poor.

According to the scientists at Climate Action Tracker, countries’ current policies put the planet on a path to warm by 3.6 C (6.5 F).  But if all the good intentions contained in countries’ pledges are put into effective action, the planet will warm by only 2.7 C (4.9 F)—halfway toward the internationally agreed goal of 2 C (3.6 F).  At this less-warm temperature the risk of planetary tipping points fades from high to moderate, but very high risks remain to threatened ecosystems like Arctic sea ice and coral reefs, on which millions depend for food (Figure 2). 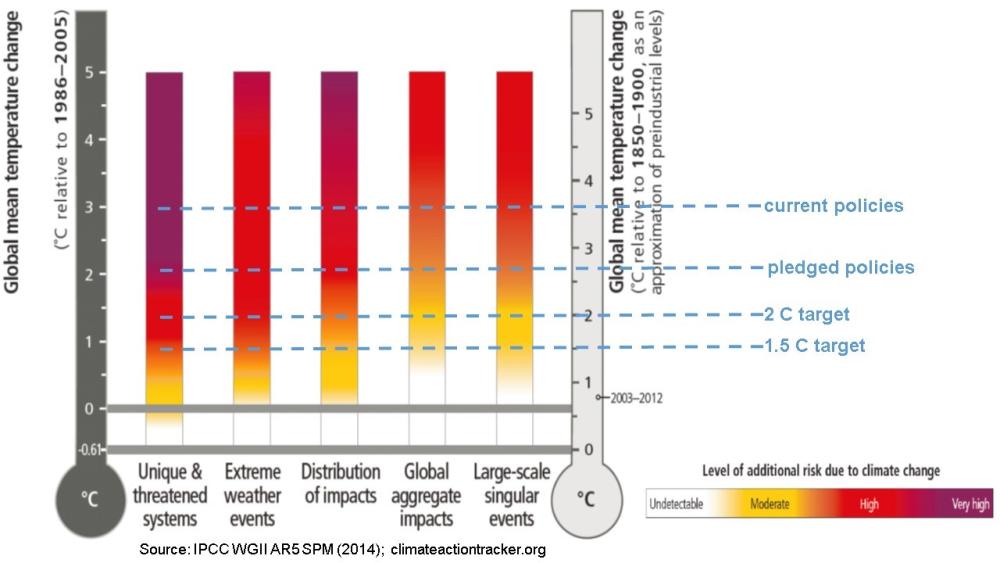 4. Decarbonization is coming. India made headlines last week for its pledge to have non-fossil sources make up 40% of its capacity to generate electricity by 2030.  Once feared to become a climate holdout due to its pressing energy demands and heavy reliance on coal, India is now showcasing leadership on the renewable energy front.  In the shadow of India, a few small countries have put forward truly transformative pledges on decarbonization.  Samoa has pledged 100% renewable electricity by 2025; Papua New Guinea has pledged the same by 2030. Guinea-Bissau is aiming for 80%; Eritrea and Namibia for 70%; Vanuatu for “nearly 100%.”  (Most of these pledges don’t include energy used for transportation.) Costa Rica and Bhutan have reiterated carbon neutrality targets; Liberia and Sierra Leone aim for carbon neutrality by 2050.

5. Big win for reforestation. China, India, and Brazil have collectively pledged to reforest an area the size of Texas. In India’s case they’ll be using their internal fiscal transfer system as a $6 billion-a-year incentive for states to maintain and restore forests.  It’s heartening to see major countries discovering that they can pull billions of tons of CO2 out of the atmosphere using trees—a safe, natural, shovel-ready “carbon capture and storage” technology with plenty of side benefits for health, energy, agriculture, and other Sustainable Development Goals.  Still, reforestation isn’t enough on its own as long as an area of tropical forest the size of Indiana or Hungary is deforested every year.  And if land is replanted with timber plantations or orchards, the carbon and biodiversity will be far less than the natural forests that once stood there.

7. Many developing countries have made conditional pledges. Dozens of developing countries have made all or part of their climate pledges conditional on financial support from rich countries. Some donors have stepped forward with climate finance: Britain has pledged £5.8 billion over five years. China recently pledged $3.1 billion, just a hair more than the United States’ $3 billion pledge to the Green Climate Fund. It’s worth remembering that for rich countries seeking to fight climate change, upping their international investments is a bargain. Reducing deforestation in the tropics can cut emissions at one-fifth the cost of reductions in Europe.

A path to victory? I admit that I’ve been skeptical of a bottom-up approach to climate change.  As a card-carrying economist, I know that in the long run international carbon trading offers a cheaper and more effective way to fight climate change than voluntary individual pledges.  (To simulate how a global carbon price could work, see SkyShares, a new online tool produced by my colleagues Alice Lepissier and Owen Barder.)

Still, it’s impressive that the pledges to-date, if fulfilled, would take us halfway to the 2 °C target.  There’s still time for some countries to strengthen their pledges before Paris (Canada? Australia?). But a more likely path to climate victory is that as countries embark on their currently pledged paths, they will find that technological advances, institutional reforms, and economies of scale make climate action cheaper and easier than they anticipated, leading to stronger commitments and actions over time.