On September 17, the World Bank issued a preliminary report on the economic impact of Ebola Viral Disease (hereafter Ebola).  (Landing page is here and report is here.)  I was one of a team of fourteen people contributing to this initial effort and the only member of the group not from the Bank.

Most of the team members are “country economists” whose job is usually to monitor the macroeconomic situation in their assigned countries and to routinely feed these assessments to the rest of the Bank for designing or evaluating projects and programs.  Although I thought I knew the Bank pretty well from my 20 years in its Development Economics Research Group (1986-2006), I gained a new appreciation of the skills of the country economists as I watched them gather and assemble tidbits of relevant data about how Ebola is affecting the economies of Liberia, Sierra Leone, and Guinea.

For example, the country economist for Liberia was able to gather data on cement sales (see Figure 1), which tell the story of an exhilarating construction boom in 2013, very good news for a desperately poor economy recovering from years of civil war. Then around March of 2014 cement sales dove to mid-2013 levels.  Causality is murky, but it’s fair to ask whether this drop was a response to the discovery of the first West African Ebola case in neighboring Guinea.  The recovery of sales the following month to a level near the previous peak suggests that investors and construction contractors had shrugged off their worry, thinking that the outbreak had been contained.  But then in August, 2014, as evidence accumulated that Ebola was out of control in Monrovia, cement sales plummeted to pre-boom levels.  Since WHO’s latest update shows Liberia’s epidemic continuing to grow, it seems likely that the last quarter of 2014 will see further collapses in cement sales, to levels below those of 2010.

Similarly, a World Bank country economist contacted the Sierra Leone immigration department to request data on travel to that country.  Here too the story is one of economic retraction, if not collapse, as travel declined by 75 percent between April and August of 2014.  Note that business travel (the green segment of the bars in Figure 2) declined by even more (in both relative and absolute terms) than other types of visitors, which suggests that these declines in visitor numbers will depress future as well as current economic performance. 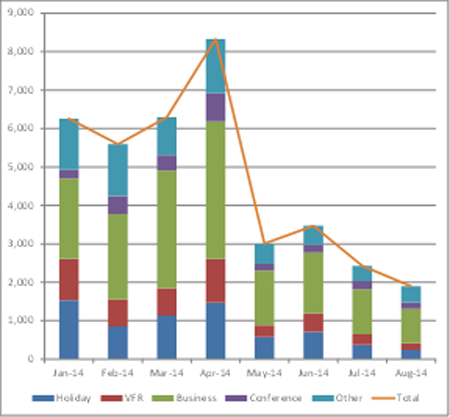 In my first blog on the economic impact of Ebola, I argued that most of the economic impact of the outbreak of a mortal disease like Ebola is from aversion behavior, rather than from either the “direct” or the “indirect” channels that health economists doing so-called “cost-of-illness” studies typically consider.  (For cogent expositions of COI definitions and methods, see the Cost of Illness Handbook published by the US Environmental Protection Agency or the PPT slides posted on the CDC website.)  These bits of data on cement sales and visitors show impacts of the Ebola outbreak which lie well outside the cost of treating the few thousand cases of illness or of replacing the labor of the sick and dying.  The cement and travel market effects are instead manifestations of aversion behavior and its crushing impact on economic activity.

On the basis of these building blocks, and others cited in the World Bank report, the country economists used their intuition and the national account identity to build out estimates of the 2014 impact of Ebola on Liberia, Sierra Leone, and Guinea. They then went further, estimating optimistic and pessimistic 2015 scenarios for each of the three countries. Their results are assembled in Figure 3 below. 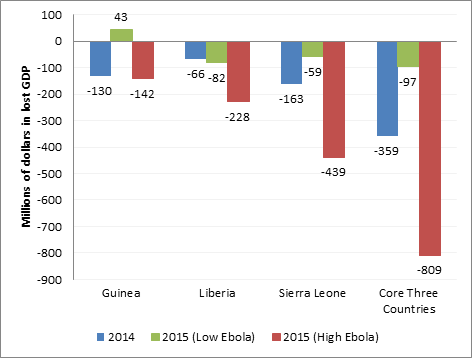 Some features of these results stand out.  First, the country economists judge that even in their optimistic 2015 projection, Liberia will sustain as large an impact as in 2014.  Under their optimistic assumptions, Guinea is expected to regain part of its losses and Sierra Leone to suffer much less than in 2014.  But the difference between the economists’ optimistic scenarios (in green) and their pessimistic ones (in red) is quite large, reflecting enormous uncertainty.  Over all three countries, the estimated 2015 impact in the optimistic scenario is only about 12 percent of the impact in the pessimistic one.  Adding the blue 2014 estimate for all three countries to the red 2015 estimate gives a pessimistic estimate of US$1.2 billion total loss of domestic product over the two years.  For a population of only 22 million people in the three countries, this comes to about US$50 per capita, which is more than a tenth of the per capita GDP of Liberia, for example.

The report concludes with four recommendations, which are summarized in the report’s landing page as:

By financing medical care, the first of these recommendations reduces the direct and indirect costs of the Ebola epidemic.  The other three recommendations address and attempt to mitigate the devastating economic impact of the aversion behavior. Bridging the fiscal gap sustains government functions and thereby reassures observers that the governments will not collapse under the stress of the epidemic. Financing the international transportation links can improve their security against Ebola transmission, thus reducing the aversion behavior of international trading partners.  And strengthening surveillance and detection systems provides an early warning system that reassures domestic and international economic agents that, once under control, the Ebola epidemic will NOT soon return.  If the World Bank and other donors vigorously implemment these policies, one can hope that these fragile young economies will soon resume the robust growth they recently experienced. 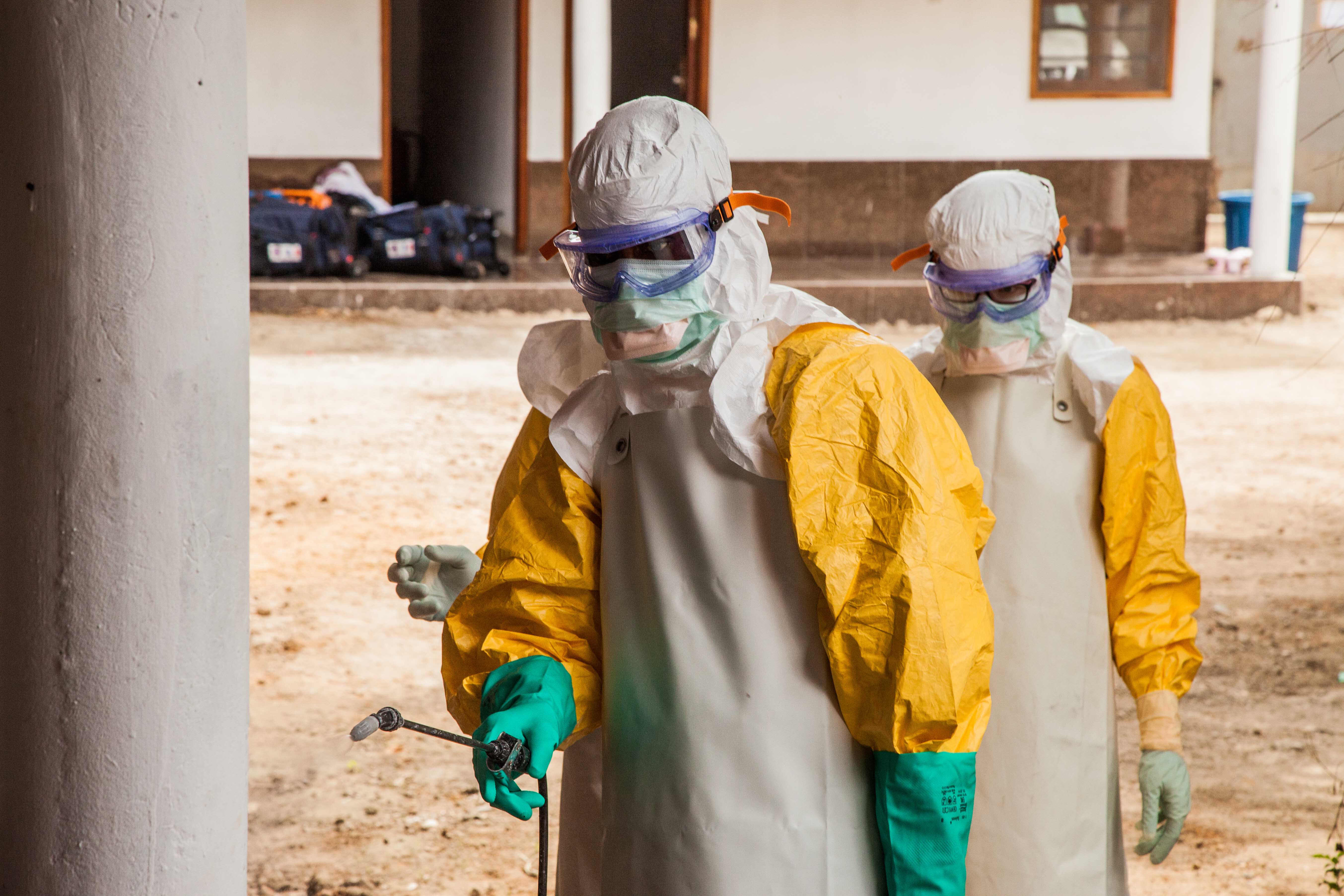 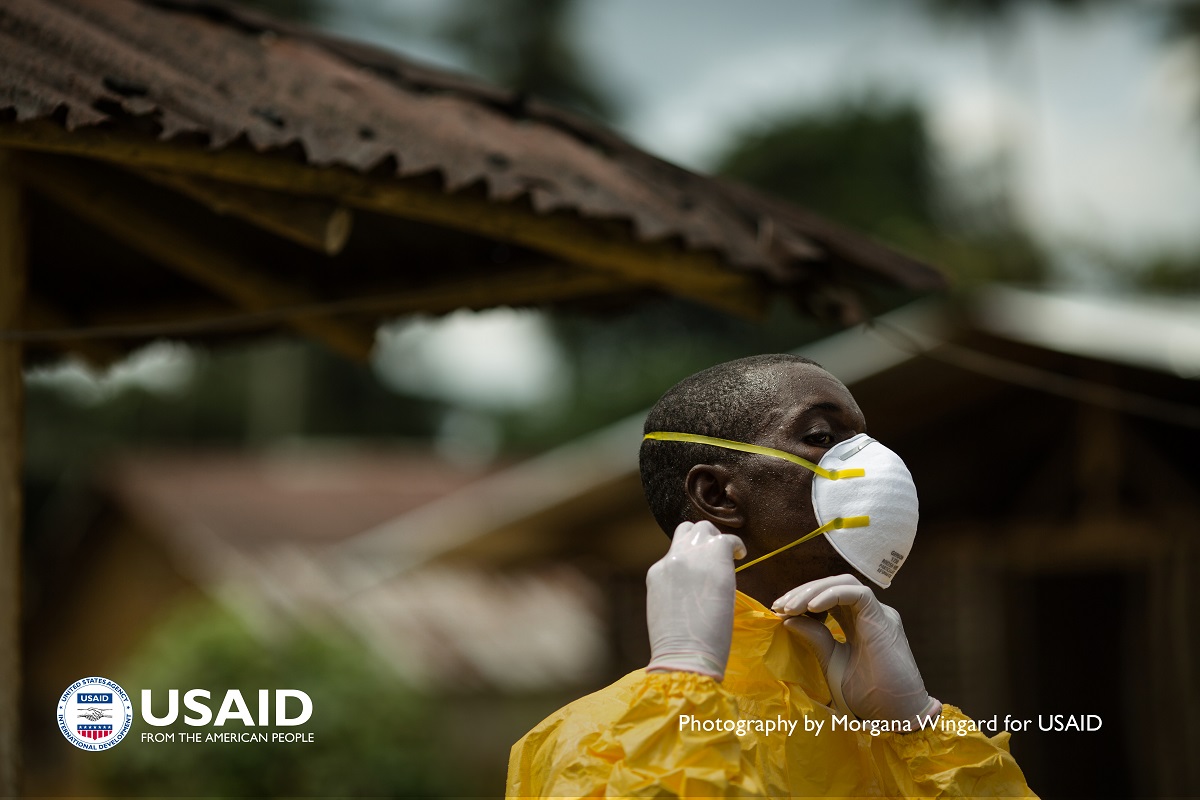