This blog is co-authored by David Evans, Senior Economist at the World Bank (web page; Twitter).

The World Bank on Wednesday released a report titled “The Economic Impact of the 2014 Ebola Epidemic: Short and Medium Term Estimates for West Africa,” which we and other co-authors blogged about yesterday on the World Bank’s site. The report’s results have been summarized with various degrees of detail in the Financial Times, Le Monde, El Pais ,and the Washington Post.

The bottom line is that in the more pessimistic “High Ebola” scenario, the impact on West Africa will total about $33 billion over 2014 and 2015, which means that the epidemic will destroy about a third of the economic growth in the region.  But the epidemic is moving faster than we economists can work.  The latest information suggests that even the World Bank’s “High Ebola” scenario may be optimistic.

In my (Mead’s) blog on the previous version of this report, I described how the World Bank country economists assembled a picture of the epidemic’s impact on Liberia, Sierra Leone, and Guinea, the three most affected countries, by direct observation of a selection of actual indicators, such as cement sales and visitors.  The difficult part of this exercise was to extrapolate these observations contemporaneously to the entirety of the three economies for third-quarter 2014 and then to project them forward to the fourth quarter and to 2015.  While this process may be informed guesswork, it has the advantage of being based on actual observation.  And it revealed that the third-quarter 2014 impact on Liberia, Sierra Leone, and Guinea was far too large to be attributed to the medical treatment or foregone labor of the sick.  So the estimated impact on the three core countries amounts to the first estimate of the economic cost of the “aversion behavior” that economic agents manifest in response to this rapidly spreading, often fatal epidemic.

The current report is more ambitious, because it predicts the impact of this aversion behavior on the entire West African economy.  The country economists estimated the percentage reduction in the growth of GDP in Guinea, Liberia, and Sierra Leone due to domestic and international aversion behavior as described in the previous blog.  Then the economist running the Bank’s MAMS model found a “reasonable” combination of reductions in capital and labor and increases in transactions costs, which would produce this large a reduction in output growth in Liberia, the most seriously affected country in the world.  These percentage reductions in factor inputs and increases in transactions costs were then scaled to all the countries that are represented in the Bank’s LINKAGE model of the global economy.  The LINKAGE model was then run to capture the interaction effects among all the world economies.  The results for a “Low Ebola” and a “High Ebola” scenario are presented in Figure 1. 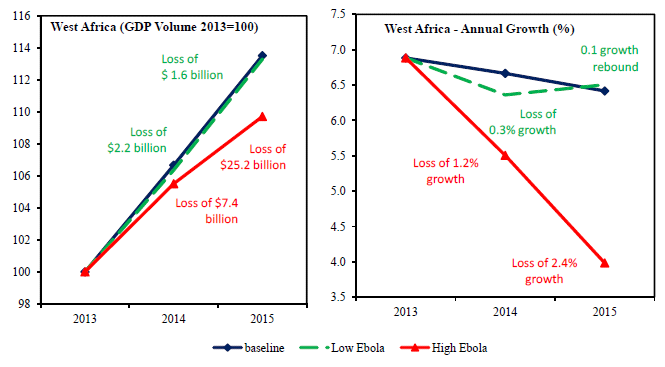 The resulting “High Ebola” estimate of a $32.6 billion impact on West Africa thus captures not only the expected cost of the aversion behavior in West Africa, but also the expected cost to West Africa of the expected aversion behavior elsewhere.  For example, the model allows for small percentage impacts on the transaction costs in the United Kingdom, Belgium, Germany, and the United States due to sporadic Ebola outbreaks, each of which has a small probability of being generated by travel from West Africa.  Since any reduction in the GDP growth of these rich countries reduces their demand for imports from West Africa, this “general equilibrium effect” further reduces West Africa’s growth.

But over the month that we economists have been working to gauge the size of its economic impact, Ebola has continued to move.  On October 8, in its weekly update WHO says that:

"[T]he situation in Guinea, Liberia, and Sierra Leone continues to deteriorate, with widespread and persistent transmission of EVD. Problems with data gathering in Liberia continue.… [T]he reported fall in the number of new cases in Liberia over the past three weeks … reflects a deterioration in the ability of overwhelmed responders to record accurate epidemiological data.… There is no evidence that the EVD epidemic in West Africa is being brought under control." (Emphasis added. Source: WHO, Ebola Response Roadmap Situation Report, 8 October 2014)

Furthermore, Figure 2 shows how the affected countries are separated only by porous and insubstantial borders from neighboring countries.  As people move over the borders between Liberia, Sierra Leone, Guinea, and neighboring countries, each week that passes is another roll of the dice for these neighbors.

With every passing week, the World Bank’s “Low Ebola” estimates, which assume the epidemic is contained in 2014, seem less likely.  For example, according to the same WHO report, Liberia has only 21 percent of the Ebola Treatment Unit beds that it now needs (ibid., Table 3).  (Also see the Washington Post article today here.)  A patient who cannot find a bed in a treatment unit is likely to infect family members, so the epidemic continues and the domestic and international aversion behavior that fuel the economic impact are unabated. 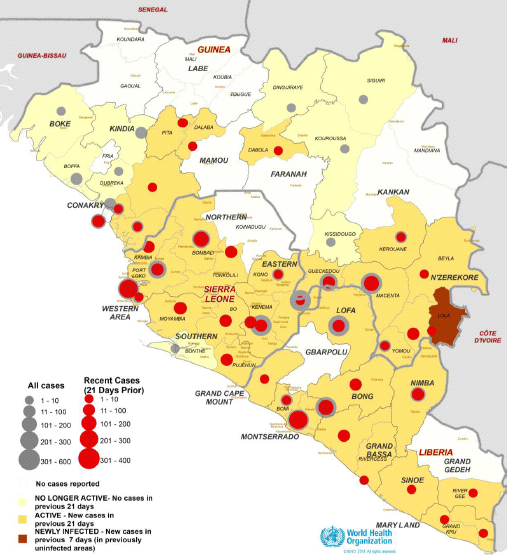 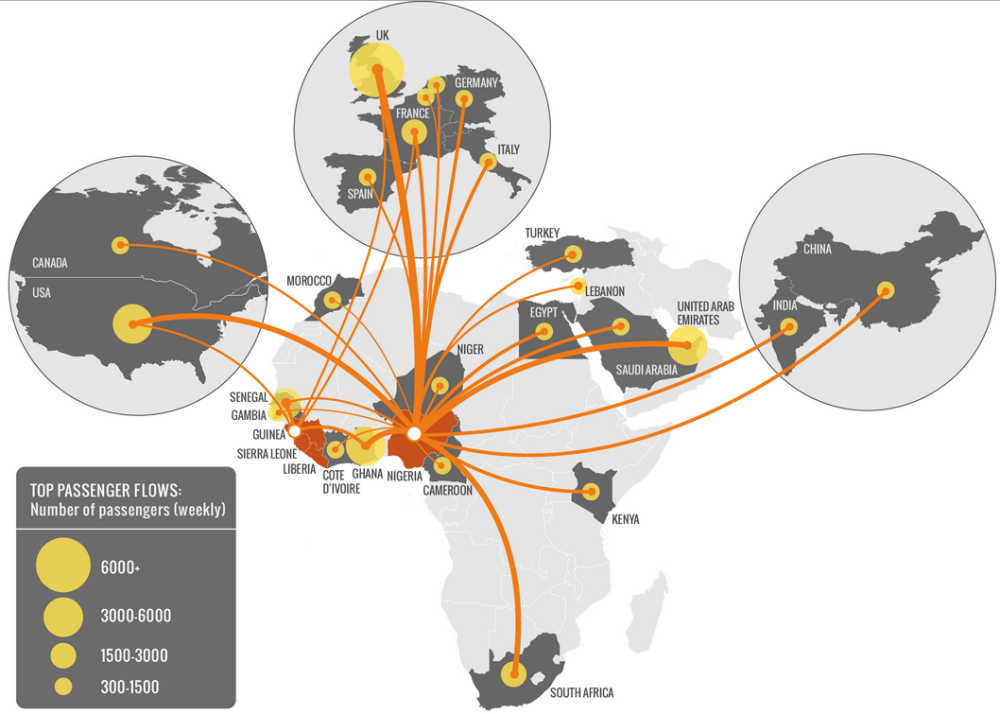 Figure 3, from the Gomes et al. paper we used to construct an index of expected Ebola impact for all countries of the world, shows how interlinked we all are with the affected countries and their neighbors.  Recent events in Dallas and Spain demonstrate the potential reach of the epidemic.  These cases in rich countries, while unlikely to spread as they might in a poor country, generate aversion behavior towards Africa which threatens to persist and damage African economic growth for years to come.  Despite the enormous efforts now unfolding, the epidemic is still moving faster than the response.  This dynamic situation suggests that the economic impact of this disease, like its health and humanitarian impact, cannot yet be bounded even by the World Bank’s “High Ebola” scenario.