The post is part of a series documenting ongoing analysis of US agencies’ efforts to incorporate country ownership approaches in their development activities. The authors conducted research in Liberia from January 15-24, 2016.

When you think of Liberia over the past two years, what’s the first thing that comes to mind? Probably not a hydropower plant. Since 2014, the devastating impact of Ebola and Liberia’s nascent recovery has dominated media headlines. But during the same period, the Millennium Challenge Corporation (MCC) quietly developed its first compact with the government of Liberia to address one of the country’s pressing needs outside of the immediate health crisis: energy access.

Through the compact development process, the MCC demonstrated unprecedented levels of flexibility to accommodate Liberian priorities in a post-Ebola landscape. Further pushing its emphasis on country ownership, the MCC also adopted new modalities of compact implementation. The agency elected to invest in Liberian systems already operating in the energy sector, rather than create new and parallel implementation structures. 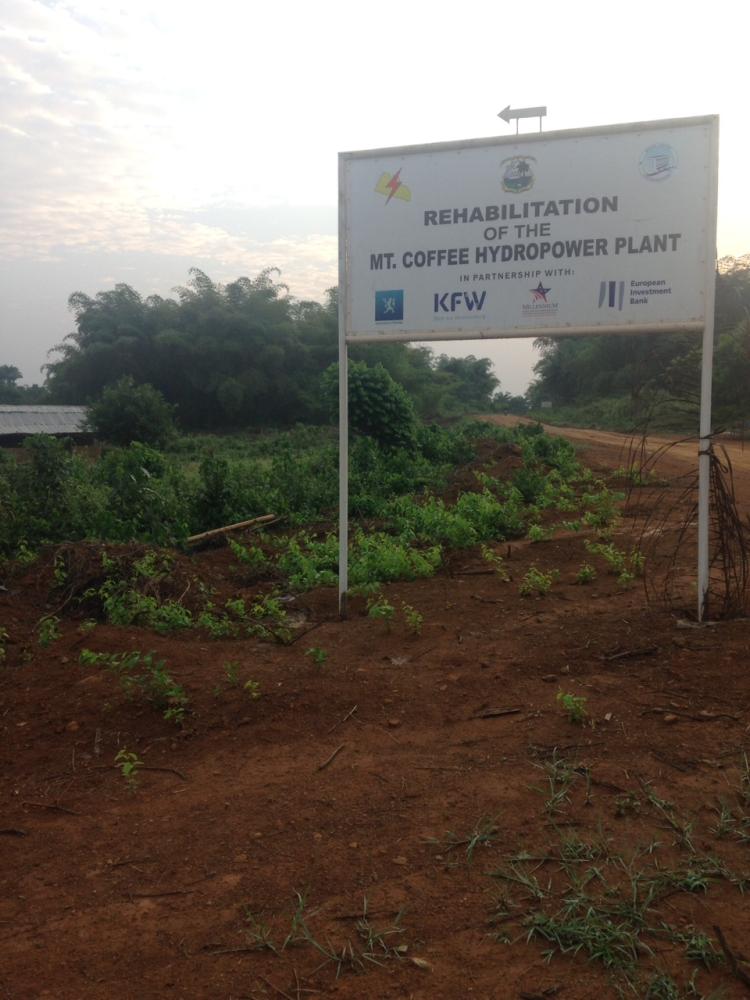 The compact’s signature investment, the Mt. Coffee hydropower plant, has the potential to become Liberia’s largest source of electricity. This generation facility will have the power (pun intended) to generate up to 88 Megawatts (MW) when fully operational, nearly a third of the 300 MW Liberia aims to generate by 2030. In a country where the cost of electricity to consumers is among the highest in the world, and less than two percent of the population is connected to the grid, this increase in generation could have a dramatic impact on the livelihoods of Liberians.

Roughly $164.9 million, or 64 percent, of MCC compact funds are budgeted for the rehabilitation of Mt. Coffee. The government of Liberia had previously planned to contribute about $45 million to the rehabilitation but was forced to redirect resources towards much-needed Ebola response efforts. MCC pivoted to Mt. Coffee to fill a critical investment gap in the wake of the Ebola epidemic.

Investment in Mt. Coffee is a priority for Liberia and, consistent with MCC’s model, addresses one of the most binding constraints to economic growth in the country. However, the US agency had to do things a bit differently in order to make this investment a reality.

In every MCC compact country, a Millennium Challenge Account (MCA) handles compact implementation. The entities are locally managed and staffed, serving as one of the MCC’s strongest and most visible symbols of country ownership. Liberia is in the process of constituting its MCA to manage and implement the compact, with one big exception. MCA-Liberia will not directly manage Mt. Coffee implementation, the bulk of MCC’s investment. Rather, MCA-Liberia will participate within the project and financial structure of Mt. Coffee’s existing project implementation unit (PIU). 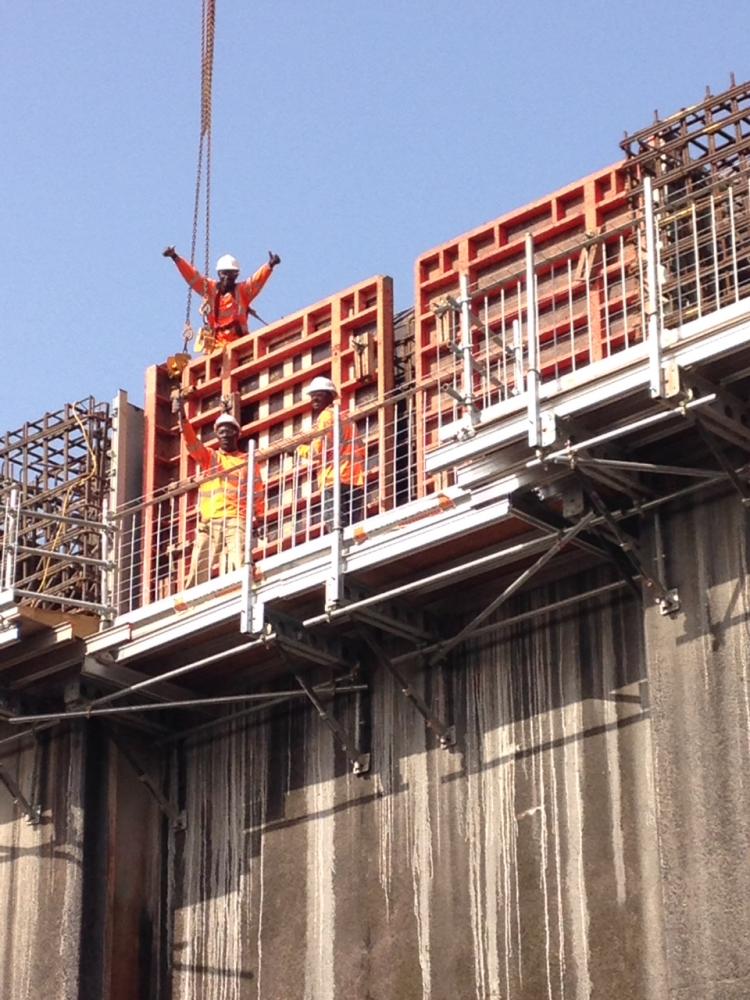 The Mt. Coffee rehabilitation project began in 2013 with funding from the government of Norway, KFW Development Bank (Germany), and the European Investment Bank. Mt. Coffee’s PIU, which sits within the Liberian Electricity Corporation, a government utility, is leading implementation.

This marks the first time MCC has agreed to finance a project that its MCA counterparts will not directly manage. So what will that mean for country ownership? There’s no doubt that this arrangement will pose additional challenges in coordination, implementation, oversight, and accountability due to multiple investors and implementers. But it also showcases MCC’s dedication to country ownership through its willingness to work with existing systems and adapt to needs and realities on the ground. The existing PIU is also managed by a Liberian entity, which coordinates closely with MCA staff. According to several Liberians, the MCC “earned a big feather in its cap” for its flexibility.

Additionally, several Liberian stakeholders noted that the MCC’s strict guidance, particularly regarding gender, social, and environmental regulations, made the existing PIU far more robust. As one Liberian put it, “For the first time, someone was asking [the PIU] the right questions.”

A need to begin disbursements for time-sensitive Mt. Coffee rehabilitation projects triggered early entry-into-force (EIF) in Liberia. MCC elected to move forward with EIF (despite the absence of an MCA or MCC Resident Country Director) in response to the needs of the Liberian government and the Mt. Coffee project. Because the systems for Mt. Coffee were already in place, there was arguably a lower risk for time wasted, similar to what occurred in MCC’s earliest compacts. However, only time will tell what effect this accelerated timeline will have on MCA-Liberia’s ability to set up the necessary systems to absorb and manage MCC resources to successfully implement the remaining compact projects.

Out of the MCC’S 28 compacts that have entered-into-force, Liberia’s compact had one of the shortest signing-to-EIF turnarounds in the agency’s history at a mere 110 days. This rapid timeframe is unusual – especially since MCC notes that countries typically take nine months to reach this stage. 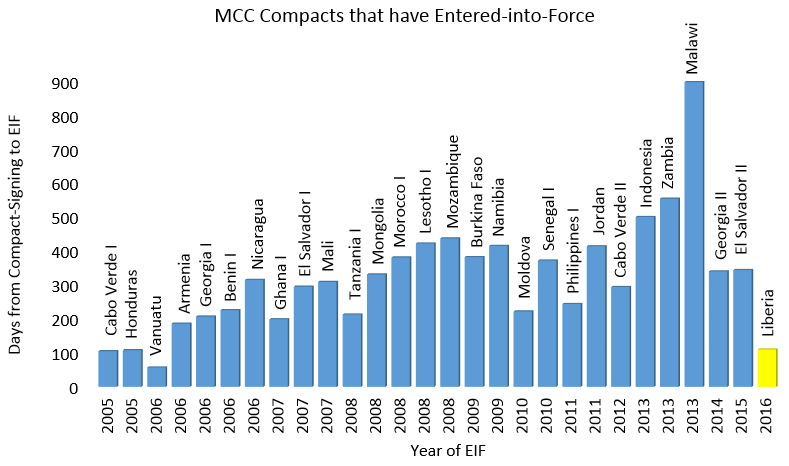 The rigidity of MCC’s model – scorecards to determine compact eligibility, strict five-year timelines, sector selection based on constraint-to-growth analysis, project selection based on economic rates of return – is critical in keeping the agency focused on generating poverty reduction and economic growth results in relatively well-governed countries. But MCC’s compact in Liberia also does an excellent job in showcasing the importance of flexibility for ensuring programs fit well with countries’ needs and appropriately adapt to realities on the ground.