Why Quantifying the Value of Tropical Forests Matters for Development

More electricity. Fewer cases of diarrhea. Fewer lives lost to deadly storms.  These are among the objectives of the development planners and financiers meeting next week in Washington at the World Bank and International Monetary Fund’s annual meetings. And all of these are provided by tropical forests.

Tropical forests’ many services to people may not be marketed, but they have value nonetheless.  Economists and scientists have spent years quantifying the value of these services, examining how declines in tropical forest cover have led to declines in tangible benefits to people.  Now, these values are systematically reviewed in a new CGD working paper by University of Montana Professor Katrina Mullan called “The Value of Forest Ecosystems to Developing Economies.”

Here are a few selected examples from the dozens of papers reviewed by Mullan: 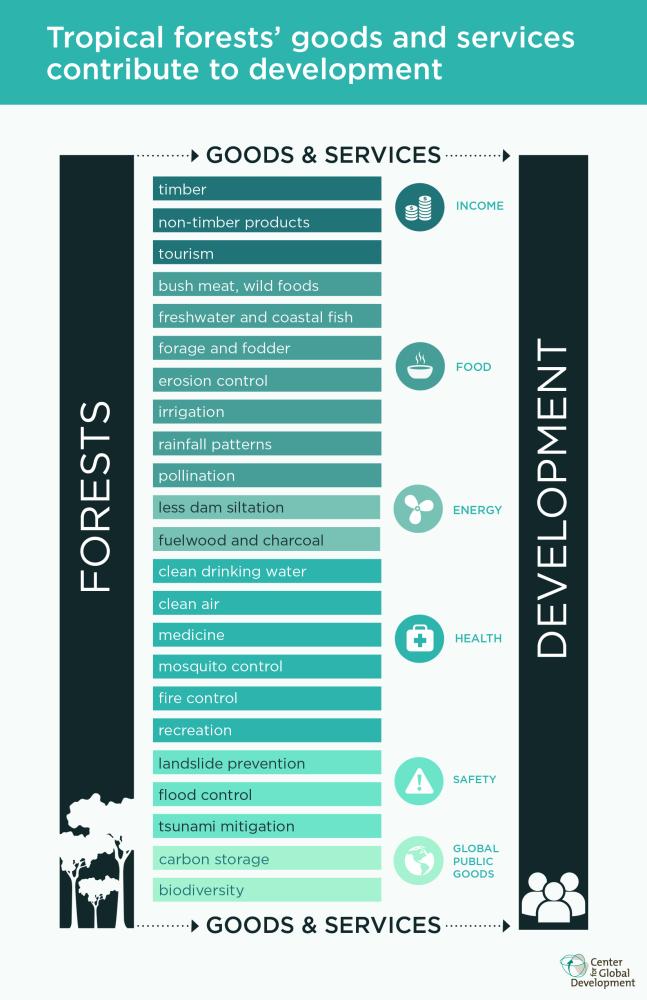 Health
The 1997–98 forest fires in Indonesia caused more than 15,000 deaths and $300 million in health damages from respiratory illness in Southeast Asia.

Safety
When a cyclone struck Orissa (now Odisha), India, killing more than 10,000 people in 1999, the presence of mangrove forests reduced damage costs by 80 percent, and every 68 hectares of mangrove forest saved one human life.

Food
Every hectare of mangrove forest removed in Thailand reduced the present value of fishery production by $708–978.

Professor Mullan’s working paper looks beyond the raw dollar value of these “ecosystem services” to examine their distribution as well.  The people who benefit most from tropical forests’ services are poor, live near forests in areas of high population density, are vulnerable to natural disasters, and are dependent on fishing or agriculture.

Understanding the value of the services that tropical forests provide to people should matter to the development planners and financiers at the World Bank and International Monetary Fund’s annual meetings.  It matters for designing performance-based payments to stop climate change, for accurately accounting for national wealth, and for deciding where and how to spend development dollars.

The World Bank–convened Forest Carbon Partnership Facility is one of several initiatives making performance-based payments to tropical states and provinces to reduce deforestation in order to slow climate change (REDD+).  Economists have often forecasted the success of such initiatives based on whether carbon payments can outcompete agricultural income.  But Professor Mullan’s paper  is a reminder that conserving forests also provides important non-monetary “co-benefits” to people in forest-rich countries.  And performance-based payments are more likely to succeed when recipients have reasons to want the paid-for outcome beyond just income, as shown by forthcoming research by CGD colleagues on cash-on-delivery aid spanning multiple sectors.

National accounts
The traditional measure of national economic growth, GDP, considers only market income.  But a better indicator of national development progress is change in national wealth, which includes both income and losses, and includes non-market natural capital.  Initiative such as the World Bank’s Wealth Accounting and the Valuation of Ecosystem Services (WAVES) partnership is working with ministries of finance to incorporate the value of ecosystem services provided by natural capital such as forests in national accounts.