STATA .do files (for replication)

The Quality of Official Development Assistance (QuODA) measures how well donors score on the dimensions of aid quality that evidence and experience suggest lead to effective aid. Those dimensions are maximizing efficiency , fostering institutions (in recipient countries), reducing burden (for recipient governments), and transparency and learning (on the part of donors). The Quality of Agricultural Official Development Assistance (Ag QuODA), as much as possible, applies the original QuODA methodology to donors giving agricultural aid. In this update of Ag QuODA, we use new data from the Creditor Reporting System to extend our earlier analysis and update it to 2011. [1] We also examine data on aid activities that the Bill and Melinda Gates Foundation is now reporting. We find that the quality of official development assistance (ODA) varies widely, with multilateral donors generally doing better on average than bilateral donors. Improvements in the data quality and availability are making sector-specific assessments like Ag QuODA more feasible, but further improvements are needed to allow a deeper understanding of aid effectiveness.

After roughly doubling from 2006 to 2009, aid to the agricultural sector appears to have topped out at around $6 billion a year in 2009 to 2011, just over 4 percent of total gross aid disbursements from all donors (according to the Creditor Reporting System). Given the size and scope of the global food security and agricultural development challenges, every dollar of that aid needs to be spent as well as possible. But when we examine the quality of official development assistance (ODA), we find that it varies widely across both bilateral and multilateral donors, and that there is little correlation between the quantity of aid and its quality.

Donors are not yet reporting on all facets of their aid activities, but they are, generally, providing more and better data under the Creditor Reporting System (CRS) of the OECD’s Development Assistance Committee (DAC). [2] Because of that improvement, we are able to bring more elements of the original QuODA framework into Ag QuODA. As in last year’s report, we have six of the eight indicators in the maximizing efficiency dimension and all eight for transparency and learning . We are able to add a fifth indicator (out of seven) for reducing burden , and we now have at least some information on fostering institutions . We cannot replicate most of the original fostering institutions indicators, but with new CRS data we can create proxies for two of the indicators and add a third (share of aid to partners with good operational strategies) that had not previously seemed worth including on its own. [3] The new data helps, but it is not uniformly available or compatible, leaving us still unable to score multilateral donors on the fostering institutions dimension. 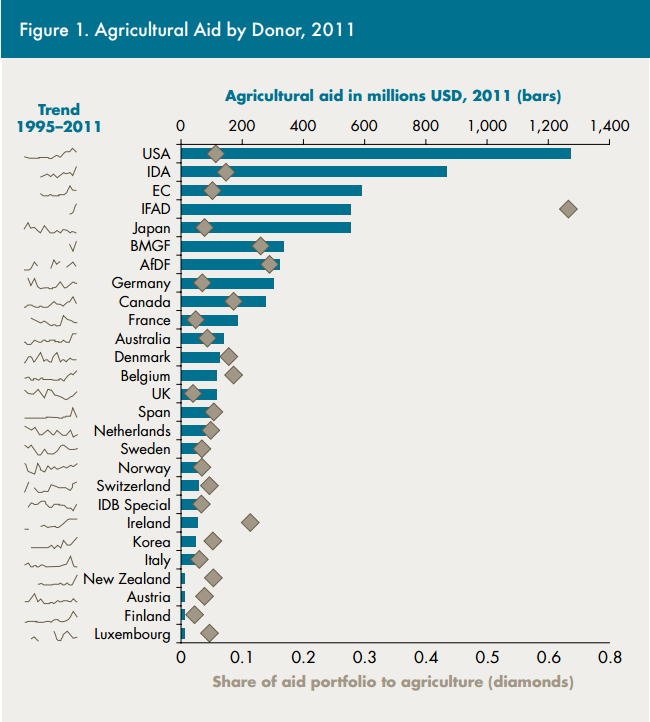 Ireland leads the way again and, this year, is in the top 10 on all four dimensions. Most notably, Ireland’s measured performance on the reducing burden dimension improved markedly, primarily because sector-level data on the use of program-based approaches in aid delivery became available, and Ireland uses this approach extensively. Overall, several smaller, northern European countries tend to do better on these measures of aid quality. The two largest bilateral donors, the United States and Japan, score poorly in three of the four dimensions. They account for 49 percent of bilateral agricultural ODA and 28 percent when multilateral institutions are included. Japan and the United States could improve their scores by focusing their aid on fewer recipients, increasing their average project sizes, and contributing more ODA through multilateral channels. The United States could do more to untie its aid and reduce the number of agencies that deliver agricultural aid. Japan could improve its score by signing onto the International Aid Transparency Initiative (IATI) and being more detailed in its reporting on projects. The drop in the United Kingdom’s ranking on the transparency and learning dimension from third to sixteenth is surprising since the Department for International Development is a leader in this area. [5]

Among the multilateral donors, the African Development Fund and the International Development Agency (IDA) of the World Bank scored well in all three dimensions for multilaterals. [6] Both the International Fund for Agricultural Development (IFAD) and the European Commission (EC) performed well in two out of three dimensions, but the EC could disburse its agricultural aid more efficiently, and IFAD had a low score in transparency and learning . [7] The Inter-American Special Development Fund scored worse on all dimensions this year, despite increasing its aid to the agriculture sector from $31 million in 2009 to $56 million in 2011. On a closer look, the Inter-American Development Bank’s Special Fund seems to do poorly primarily because of indicators, such as the share of aid to well-governed countries, that might be affected by an increase in aid to Haiti. The share of its agricultural portfolio going to Haiti after the earthquake rose from 1 percent in 2009 to 14 percent in 2011.

Figure 2 compares the Gates Foundation’s scores to the average scores for multilateral donors, the scores for Ireland, a high-performing bilateral, and the United States, which performs relatively poorly. The foundation allocated its aid more efficiently than any other donor in our sample in 2011, mostly because of its substantial support for global public goods and its well-targeted aid to recipients that are poor but also well governed. The foundation is a major supporter of the Consultative Group on International Agricultural Research and the regional centers that make it up, as well as other global public goods that are not reflected in the QuODA indicator. These include a program to improve the Food and Agricultural Organization’s statistical collection and dissemination activities and the Agricultural Market Information System that the G-20 created in 2011. [8] 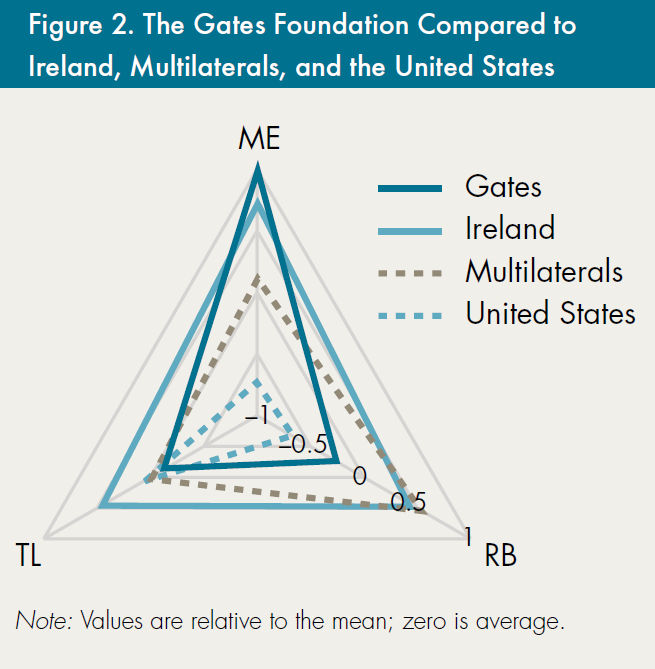 The Gates Foundation did not score well on reducing burden in 2011 because its grants were scattered across a relatively large number of recipients and the average size of its projects was small. In the middle of that year, however, the Gates Foundation announced a change in its agriculture strategy that will result in more focused relationships with a smaller number of countries based on need and the prospects for success. That policy change could improve the foundation’s score in future years. [9] On transparency and learning , the Gates Foundation was an early funder of aidinfo, and it is the only private foundation to report to the DAC system. But it has yet to sign onto the IATI standards that aidinfo helped develop; that, and not yet having a clear evaluation policy of its own, brings the foundation’s ranking down. The Gates Foundation is currently working on an official impact evaluation policy, which should help on the indicator measuring the quality of those policies. [10] If we give the foundation partial credit on the two IATI indicators because it is the only foundation reporting to CRS, then its rank on transparency and learning would move from 20th to 11th. If it fully implemented the IATI standards, Gates would catapult to 4th in transparency and learning .

The new CRS reporting requirements are a step forward in providing information that allows recipients, civil society, and taxpayers to assess donors’ performance implementing commitments they have made to improve aid effectiveness. Donors now report more fully on the types of aid they provide, through whom, and whether they are using program-based approaches that can reduce burdens on recipient governments. But there are still holes that need to be closed, particularly with respect to reporting on the use of innovative, results-based approaches to aid delivery and on evaluation practices. That would help us move from proxies for aid to quality to a deeper understanding of aid effectiveness.

The Center for Global Development is grateful for contributions from the Bill and Melinda Gates Foundation in support of this work.

We excluded Greece and Portugal from the analysis this year because their agricultural aid fell to less than $2 million.

An increase in the share of agricultural aid not reported under a specific channel of delivery is behind the drop.

Multilateral donors were excluded from the fostering institutions dimension due to incomplete data.

For more information on its evaluation policies, see the Bill and Melinda Gates Foundation, “How We Measure Success,” www.gatesfoundation.org/How-We-Work/General-Information/How-We-Measure-Success .