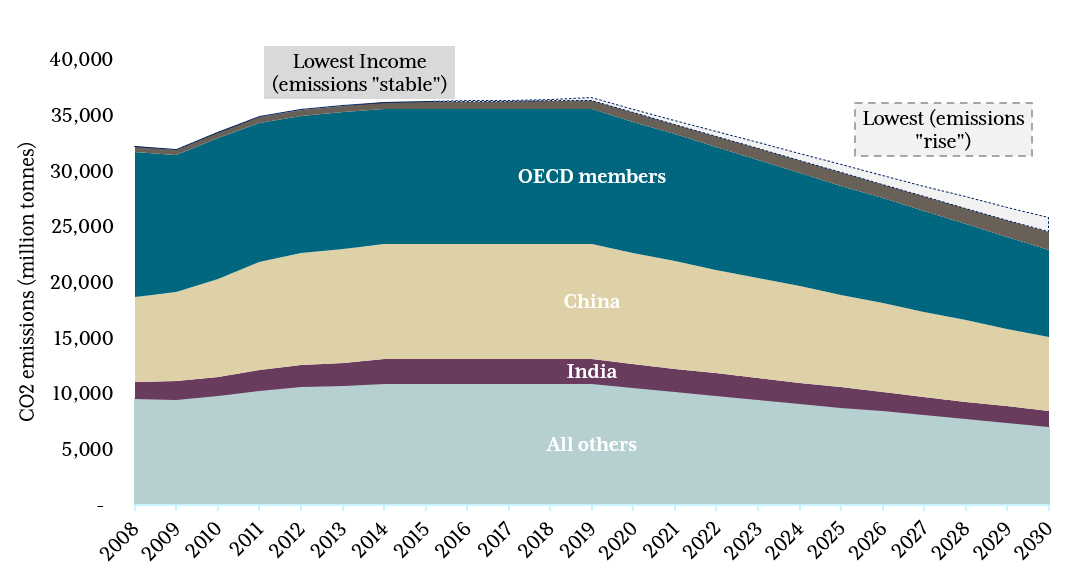 This note updates and builds on analysis from 2014 by Stefan Dercon,[1] which projects carbon dioxide emissions by the poorest countries to understand their likely future contribution to global emissions. Whilst these countries’ emissions are currently very low, there is concern that rapid economic growth could alter this picture.

We assume that economic growth is rapid for the 52 poorest countries, home to 1.4 billion people, over the next decade, and that their economies each reach income per head of $6,000. We consider scenarios where the carbon intensity of their economies stays the same or increases to the average for lower-middle-income countries.

In summary, assuming the 52 poorest countries grow their economies very fast and with no “greening” of their economies, they will still make up a small fraction of global CO2 emissions.

Whilst there are, and will be, opportunities for these lower-income countries to take advantage of low-carbon technology, the vast majority of global emissions will remain in countries with higher incomes. This suggests that concerns about growth in emissions in low-income countries could be misplaced, and that efforts to materially reduce emissions will need to be concentrated elsewhere. In addition, as technological advances identify and implement opportunities that will eventually be passed on to lower-income countries, current efforts to reduce global emissions, in line with the Paris Agreement, seem likely to be more effective where greenhouse gas emissions per capita are highest.

We are grateful to a number of people for advice on our approach and in particular to Lee Robinson for his review of our modelling. Any views and all errors are those of the authors.

Climate change is a threat to the life and living standards of poor people all over the world, and agencies are rightly responding. This note looks at what share of emissions the lowest income countries are currently responsible for, and, using a simple model, looks forward at how this might change in 2030 according to their growth and progress on emissions elsewhere in the coming decade. It concludes with some implications for the use of aid in relation to climate.

We update analysis by Dercon (2014), which showed that poor countries’ CO2 emissions were very likely to remain relatively small in global terms and suggested that concerns about growth in emissions in low-income countries could be misplaced.

The lowest income countries are the least to blame for climate change, having emitted the least. Cumulatively, the picture is stark. Of total of the 1.5 trillion tonnes CO2 emitted since 1751, the OECD has produced 59 percent, and the poorest 52 countries only 1 percent.[3] They have also benefited the least from the economic and technological development that caused climate change. 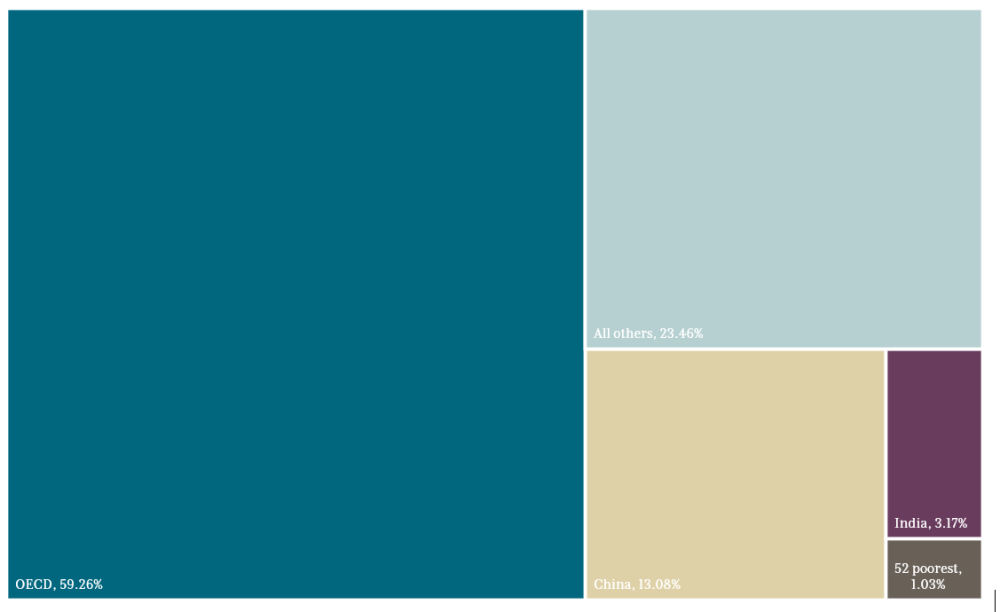 Source: Authors’ calculations using data from Our World in Data

The argument goes that although these countries might have low emissions now, as they get richer their emissions will rise, and so they need to get on a low-carbon path before they get richer or they will represent a major contributor to climate change. Below we look at recent (annual) emissions data (in thousand tonnes, Kt) which shows that low-income countries contribute just 1.6 of global emissions, even though they hold 19 percent of the world’s population—the same as China and more than the entire OECD.

In the remainder of this note, we consider various scenarios where lower-income countries do indeed grow rapidly to 2030 and look at how their emissions would change if they retain their current carbon intensity and if they follow a similar carbon path to other economies.

We follow the general approach laid out in Stefan Dercon’s 2014 paper “Climate Change, Green Growth and Aid Allocation to Poor Countries.” By updating this analysis with newer data for poorer countries up to a higher income threshold, we show that a key insight is still valid. The lowest income countries contribute very little to global climate change and will continue to do so even if they grow their economies without policies to “green” their growth.

Following Dercon, we use CO2 emissions rather than all greenhouse gas emissions. The commonly repeated goal of reaching net zero by 2050 generally refers to CO2. According to the Intergovernmental Panel on Climate Change, “limiting warming to 1.5°C implies reaching net zero CO2 emissions globally around 2050.”[4] The IPCC estimates that to keep to 1.5°C warming, we must reach net zero greenhouse gasses between 2060 and 2080.[5] A fuller analysis could include all greenhouse gases, with different date ranges.

Dercon (2014) defined the poorest countries as those with a GNI per capita of $3,500 or less, and projects what would happen if all these 52 countries were to increase their income to $4,000. Dercon selected this income level based on analysis by Martin Ravallion[6] that showed it would be “unlikely to be economically distortive or politically impossible” to eliminate extreme poverty using redistributive taxation.

We assume that on average GNI per capita in these countries increases to $6,000 by 2030 without any “greening” of their economies—that is, without any decrease in the carbon intensity of their GNI. Because we aggregate emissions for the whole group of countries, these assumptions are consistent with different variations at a country level. Richer countries like Nigeria and Nicaragua could reach $6,000 much earlier, and then level off their emissions by starting to “green” growth, whilst poorer countries grow extremely fast. This would be an excellent outcome for human development and would take us significantly towards the achievement of Sustainable Development Goal 1 to eliminate extreme poverty.

However, the assumptions are also consistent with a high common growth rate across these countries (also without any greening), which would make large economies in the group like Pakistan and Nigeria, much bigger emitters, while poorer countries do not reach $6,000 per year. This seems a more likely scenario. On average, to reach $6,000 a year GNI per capita, these countries would need to grow their GNI by 6.6 percent a year.

In order to project CO2 emissions per capita in future years for the 52 lowest income countries, we assume that these countries reach $6,000 GNI on average by 2030. We project two different growth paths using different assumptions about carbon intensity of GNI. Carbon intensity of GNI is calculated as tonnes of CO2 emitted divided by GNI (PPP, current international dollars).

The first scenario assumes that carbon intensity of GNI remains flat at 134 tonnes of CO2 per $1m of GNI. The second scenario assumes that carbon intensity of GNI increases to 244 tonnes per $1m of GNI, which was the average level in 2014 for lower-middle-income countries, which had an average GNI per capita of $7,585. On average, OECD countries emit 235 tonnes of CO2 for each $1m of GNI.

In order to consider how lower-income countries’ emissions might compare with other countries and the global total, we project two potential emissions pathways for the rest of the world, one optimistic and one pessimistic. In the first, we assume that all other countries starting in 2020 reduce their emissions linearly towards net zero in 2050. In the second, we assume that emissions in the rest of the world stay stable until 2030. This could be because decreases in emissions in some high-income countries are offset by increases in emerging economies.

Table 2 sets out the projected emissions and population to 2030 for the lowest income countries, and table 3 compares them to the OECD and global total (full results are available in the spreadsheet here).

If emissions in the rest of the world were to stay constant until 2030 (see table 3, scenario B, below), that would mean that despite holding 23 percent of the world’s population, the 52 lowest income countries would only produce 4 percent of global CO2 emissions.

Lower middle-income countries, whose average GNI per capita is just over $7,500, emit more CO2 for each dollar of GNI than the average of the 52 lowest income countries. It is therefore possible that as their economies grow, the poorest countries will become more CO2 intensive. But this is not assured. CO2 intensity of GNI has been steadily decreasing worldwide with GNI growing faster than emissions, including in both lower-middle-income countries and the lowest income 52 countries (see figure 2). It seems likely that with improvements of technology, growth will continue to outstrip emissions. However, if developing countries did follow this carbon-intensive path, what would be the outcome?

In the “rises” scenarios (C and D), we assume again that all the 52 lowest income countries grew to $6,000 a year GNI per capita by 2030, but that the carbon intensity of their per capita income increases to the average for lower-middle-income countries in 2014 (the latest year for which we have emissions data). In this case, by 2030 the poorest countries would have CO2 emissions per capita of 1.46 tonnes. If all other countries froze their emissions (D), this would be 16 percent of per capita emissions in the OECD, and only 8 percent of total global emissions. 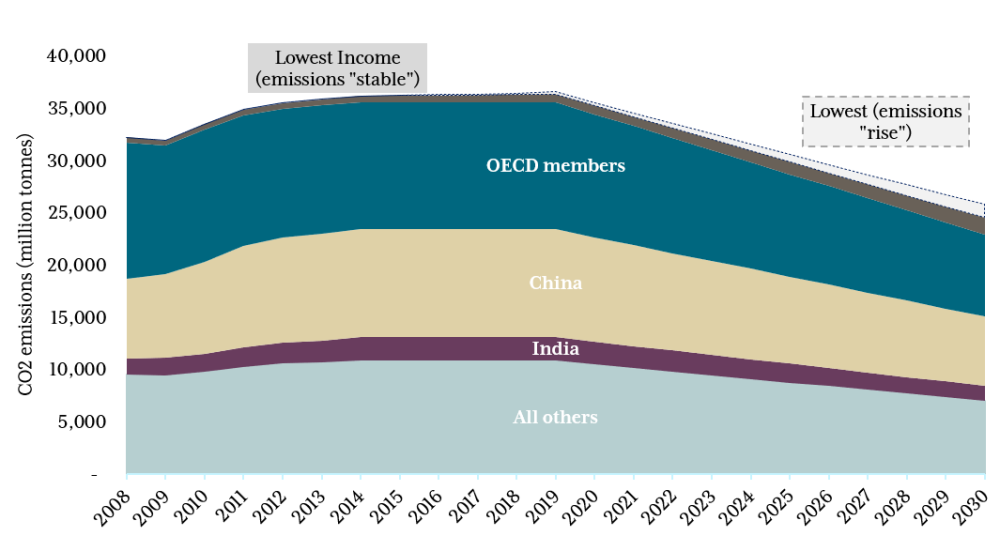 Updating Dercon’s 2014 paper “Climate Change, Green Growth and Aid Allocation to Poor Countries,”[9] we show that the poorest 52 countries currently produce only 1.6 percent of global CO2 emissions (575mt per year)—less than Germany alone. The OECD produces 34 percent (12,151mt), despite having a smaller population.

The Sustainable Development Goals and development efforts are keen to see strong economic growth, and we consider a scenario where each of these countries’ GNI grows to $6,000 per head by 2030 and consider the implications for global emissions.

Our simple model of the future path of global CO2 emissions shows that even if the rest of the world makes straight-line progress towards zero emissions in 2050, and even if the poorest 52 grow very rapidly with a historically consistent rise in the carbon intensity of GNI, then those 52 countries will still only account for only eleven percent of global emissions. In arguably more likely scenarios, it would be 6-8 percent; or potentially as low as 4 percent.

In conclusion, even radical reductions in emissions in the poorest countries will have very small effects on the global goal of reaching net zero carbon emissions by 2050.

Ravallion, M. 2010. "Do Poorer Countries Have Less Capacity for Redistribution?" Journal of Globalization and Development. 1(2), Article 1: 1-28.

[2] 2014 is the latest year for which the World Bank produces CO2 emissions data for all countries.

[3] Author’s analysis of data from Our World in Data, https://ourworldindata.org/co2-and-other-greenhouse-gas-emissions