Promoting Investment in Research for Development Outcomes: A Research Ventures Fund at the World Bank | Center for Global Development | Ideas to Action Skip to main content

Promoting Investment in Research for Development Outcomes: A Research Ventures Fund at the World Bank

This note proposes a new Research Ventures Fund (RVF) at the World Bank to better prioritize R&D investments in support of development progress. The RVF would employ financing mechanisms that are consistent with research needs: significant scale and scope, patience, and tolerance for failure. Existing development-oriented research consortia like CGIAR would provide a promising start for RVF funding allocations. Donors to the IDA-19 replenishment should take the first step in securing funding for the new fund in 2019.

Technological progress is an essential driver of economic growth and well-being. Investments in the sciences to pursue basic and applied research over decades have yielded vast economic returns globally with innumerable innovations reflected in lifesaving pharmaceuticals, more productive crop yields, and safer and more productive workplaces.

In economic terms, investments in research and development (R&D), particularly in activities whose economic returns cannot be captured by any one firm or nation, represent a global public good (GPG). And while nations may reap benefits to varying degrees from innovation, developing countries have clearly gained and stand to gain from R&D activities globally, all the more so if the research agenda itself better targets the needs of developing economies and populations. Norman Borlaug won the Nobel Peace Prize for his efforts to develop high-yield, disease-resistant wheat varieties, introducing these varieties in major developing countries like Mexico, India, and Pakistan. This “green revolution” demonstrated how scientific research could be marshaled for massive gains in the developing world.

Yet, as the world’s leading development institution, the World Bank’s relationship with R&D has been anomalous. The institution is perceived as generating a large amount of research beyond its banking activities. Indeed, a staff of 10,000 implies a great deal of activity that is not associated with project finance. The anomaly is the degree to which the bank’s research is confined to the social sciences and is not oriented toward the sorts of activities that can deliver future green revolutions. Its support for basic and applied research in the hard sciences over the years has been remarkably hesitant, unpredictable, and small—none of which characterizes an approach associated with high success in scientific research.

The World Bank’s absence from R&D is a problem of mandate, budget, and habit. Fortunately, the bank’s mandate is evolving in favor of GPG activities, as reflected in the bank’s “Forward Look” agenda, as well as new GPG-directed commitments under the 2018 capital increase.[1] With a firmer mandate, the second is solvable. In order to address the question of budgeting for R&D activities, this note proposes a Research Ventures Fund, with funding anchored by IDA and supported by IBRD and IFC. With a clear mandate and financing mechanism, forces of habit can readily adjust.

The World Bank has remained remarkably faithful to its founding mandate and model over 75 years, continuing to define country-level financing and policy engagement as the core of its development objectives.[2] As a financial institution, the bank (IBRD and IDA) almost exclusively lends or extends grants to sovereign governments. Of course, its staff of 10,000 are also engaged in a wide array of policy-oriented activities in support of these loans, including research activities that are quite removed from country-level engagements. But this research activity is largely restricted to the social sciences and is made financially viable by the country-lending model. That is, earnings on lending support the bank’s considerable administrative budget, with costs largely driven by staff, most of which are not directly engaged in carrying out lending operations.

But the current arrangement poses a dilemma. This multi-billion-dollar lending institution generates profits sufficient to support a staff of in-house economists, but not to support research activities in the wider sciences, even though these other disciplines are critical for development progress.

With research activities dominated by economics, the bank is able to support its research function almost entirely in-house. The existing model is more akin to a US National Institutes of Health, which employs research teams directly, than to a US National Science Foundation (NSF), which supports an array of external research institutions through grant allocations.

The World Bank of today has evolved incrementally and uneasily to support a significant level of social science research without the bank’s shareholders ever having adopted a clear mandate or operational model to support research activities. As a result, efforts to expand these activities routinely confront countervailing pressures to rein in the bank’s administrative budget, as well as constraints imposed by the external environment (i.e., low earnings on bank reserves due to prevailing interest rates).

The one remaining example of an NSF-like research funding arrangement has been a victim of these pressures in recent years. Long-standing World Bank support for CGIAR came under pressure in 2015 as the bank’s net profits shrank and bank leadership sought to cut the institution’s overhead. CGIAR funding was particularly vulnerable because it did not have a clear internal constituency (why should the bank fund another institution when it has internal funding obligations that are also under pressure?), and the funding itself did not have a clear mandate.

In contrast, the establishment of the IFC and IDA in 1956 and 1960 respectively marked major shifts in the bank’s mandate in the face of compelling needs (private sector-oriented development activities and the need for concessional financing for low-income country governments). With adoption of new mandates and strong support from shareholders, these arms of the bank have grown to operate on par with the IBRD.

The Center for Global Development’s 2016 High-Level Panel on the Future of Multilateral Development Banking called for a new global public goods mandate akin to these earlier innovations.[3] Such a mandate would help to achieve greater scale for GPGs and ease the current constraints associated with incremental funding.

In this regard, the 2018 IBRD capital increase marked a breakthrough, introducing a GPG fund.[4] The agreement makes clear that pursuit of GPGs is important to the bank’s core mandate. Nonetheless, the fund itself is subject to the constraints of the bank’s non-lending activities: a small allocation of funds (“up to” $100 million) and dependence over time on the bank’s administrative budget to sustain it. In a sense, the GPG funding commitment may prove too small for the bank’s shareholders to even recognize what they’ve agreed to.

It’s also important to recognize that research competes for funding among other activities under a GPG mandate, rendering an allocation of $100 million exceedingly small.[5] For example, “greening” energy investments at the bank by buying down the incremental costs associated with cleaner energy investments is clearly a GPG and an expensive one at that.

The World Bank’s approach to financing research activities could proceed under a hybrid model. Support for in-house social science research can continue as it has. The bank would continue to cover these expenses through its core administrative budget.

Alongside these activities, the bank would adopt a financing mechanism akin to the NSF, financing applied scientific research through allocations to external research institutions. World Bank support for CGIAR already falls in this category, but on a very small scale (just $30 million p.a. through the administrative budget).

This Research Ventures Fund would support external R&D activities that hold promise for development. Reflecting the GPG nature of these activities, the proposed funding draws from sources across the World Bank Group in order to achieve broad-based commitment and sustainable financing commitments (see table 1).

IFC income is less predictable than IBRD income, though it has been significant in recent years, and IFC income allocations to IDA (typically more than $200 million p.a.) have all but disappeared (see figure 1). At the same time, the IFC itself is tapping grant funds through the IDA replenishment process, drawing on $2.5 billion of IDA funds through the IDA-18 “private sector window.” From this standpoint, a $25 million annual contribution to the RVF from IFC income seems plausible and merited. 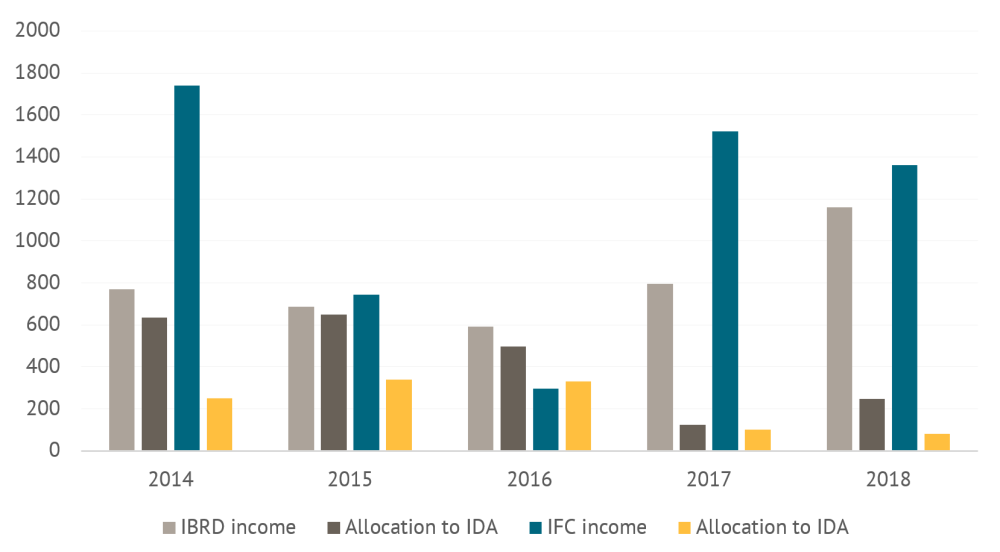 A modest new set-aside within the IDA-19 replenishment could form the core funding stream for RVF, with a replenishment commitment of $450 million, or $150 million per year from 2020 through 2022. IDA-19 marks a favorable moment to pursue a new set-aside. Reforms in IDA-18 significantly expanded IDA’s overall financing capacity, which, in turn, facilitated a greater use of set-asides within the IDA financing envelope. Nearly one-third of replenishment funds in IDA-18 were programmed outside of the core country financing frameworks (defined by the performance-based allocation system) (figure 2). 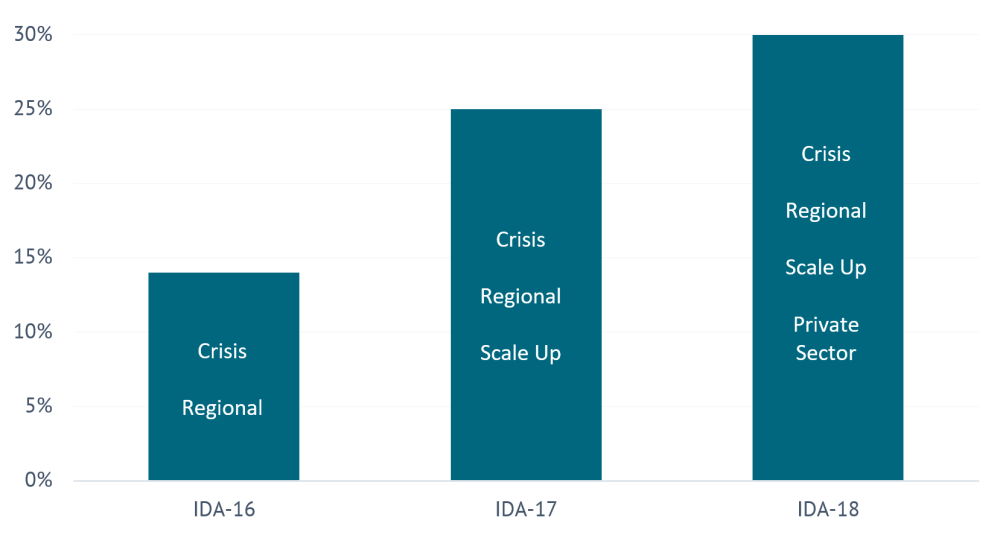 Greater reliance on set-asides, or earmarked funds, reflects an evolution in donor and IDA country attitudes. With a greater per-country financing envelope, there is more open-mindedness to consider funding objectives that do not fit into the traditional country partnership framework.

There has also been an evolution in the use of the existing IDA regional window, itself a set-aside, to pursue GPGs, consistent with the window’s multi-country orientation. In the IDA-18 replenishment, IDA deputies and the bank’s board of executive directors approved the use of $50 million from IDA’s regional window to support the operationalization of the Pandemic Emergency Financing Facility (PEF). The PEF is an insurance mechanism intended to help low-income countries respond rapidly to pandemics. From this standpoint, the regional window financing envelope would be a likely source of funding for the RVF.

Finally, the RVF could be open to donor contributions, from IDA donors and non-sovereign donors (foundations and other private actors). Governance arrangements would require some consideration. There are various World Bank trust fund models that enable private donor participation. At the same time, the RVF envisions a central role for core bank resources (IDA allocations and IBRD/IFC income). As such, bank shareholders would likely be averse to a trust fund-like governance arrangement. A hybrid model, which preserves core bank governance through the board of directors, could also allow for robust technical oversight through an independent advisory group.[6]

Existing research consortia like CGIAR provide promising targets for leading allocations in the early years. The research group’s activities are strongly aligned with the World Bank’s development goals in agriculture, rural poverty, and climate resilience, and there is a long-standing funding relationship. CEPI, a platform to advance promising technologies to better safeguard against epidemics, would be another promising funding vehicle for global health objectives.

Over time, the RVF’s allocations could expand with direction from bank sector experts, shareholders/donors, and an independent technical advisory group. The qualifying process for new research institutions should prioritize research outcomes in development-relevant areas. Categories of financing allocations could include:

Conclusion: Scale and Scope, Patience, and Tolerance for Failure

The success of the RVF will depend on key characteristics identified earlier:

The World Bank has embraced the language of global public goods in recent years. Delivering on GPGs will require clearer commitments to development-oriented R&D, expanding beyond a model that has long supported an in-house team of economists to embrace a broader array of external R&D activities globally. 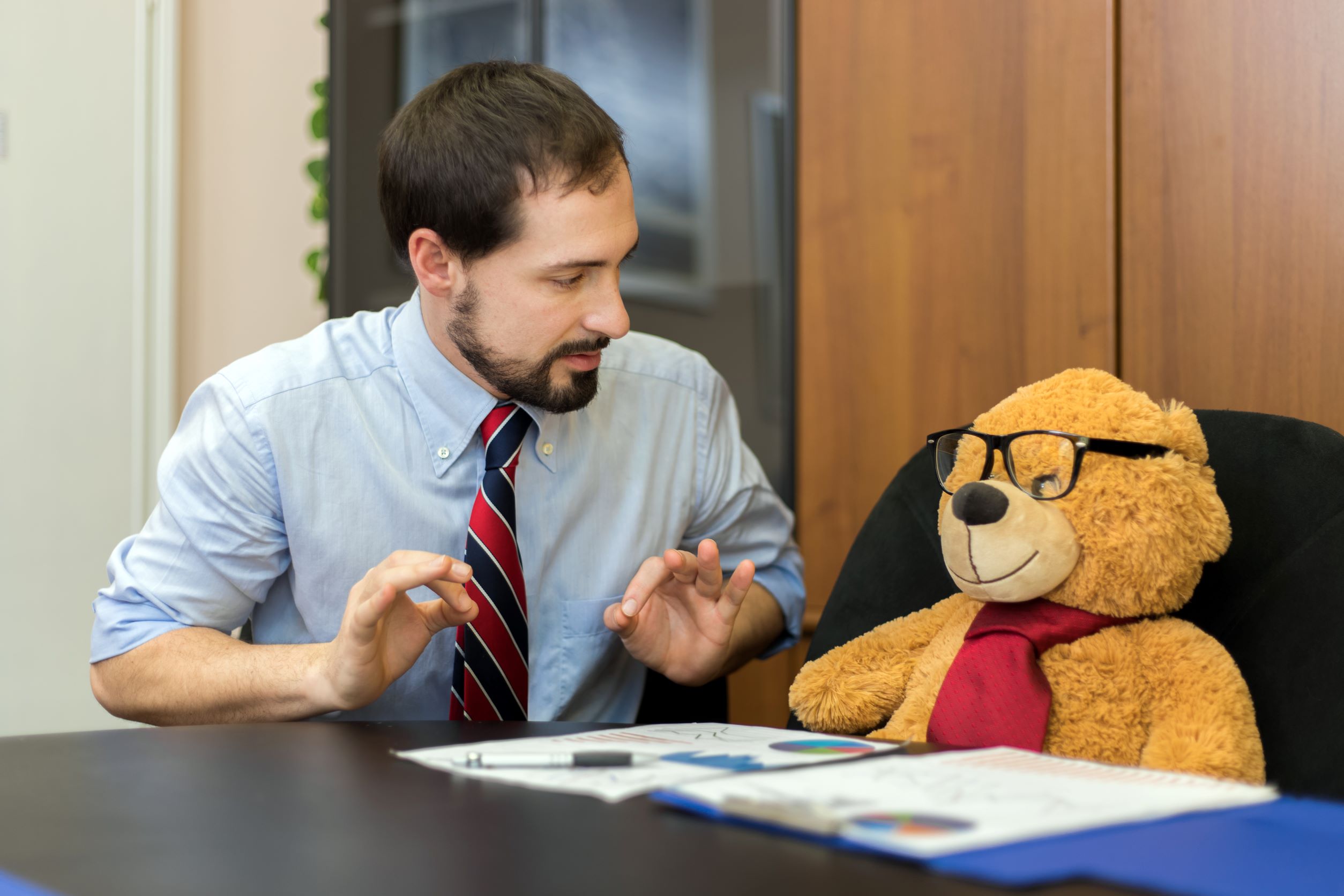 If We Want the World Bank to Solve Global Challenges, It Has to Be Bigger—but Also More Cuddly
Charles Kenny
August 26, 2022