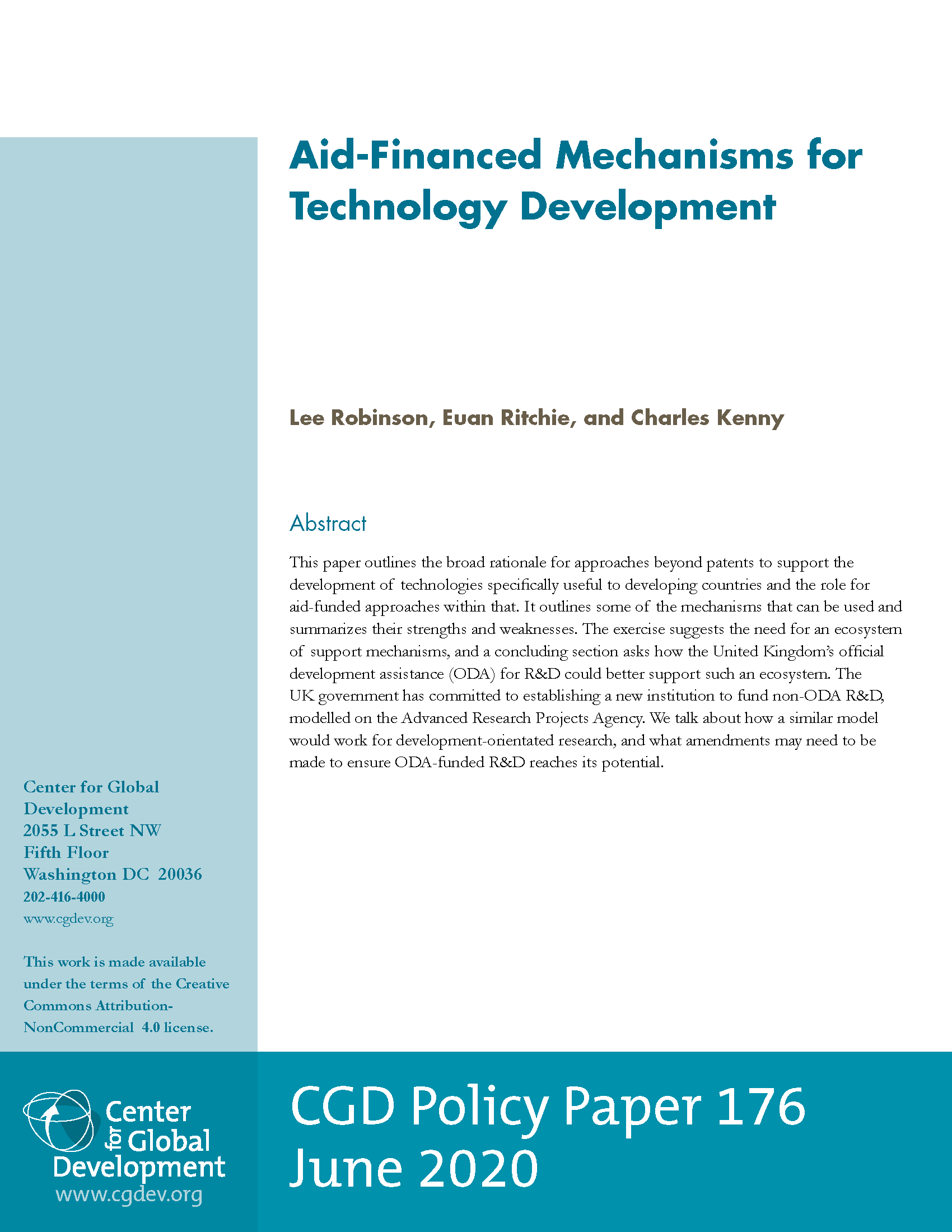 Aid-Financed Innovation Can Play a Big Part in Global Development

Aid resources have played a vital part in developing and rolling out technologies and innovations that have had a significant impact on productivity and the quality of life—from Norman Borlaug’s work on the dwarf and resistant plant varieties of the green revolution supported by the Rockefeller Foundation through the advance market commitment for the pneumococcal vaccine supported by Gavi to the UK Department for International Development’s (DFID) backing for the development of M-PESA mobile finance in Kenya. The economic returns to such advances can be huge. DFID’s M-Pesa investment was only £1 million; annual mobile payments in the country are now worth over 50 percent of Kenya’s GDP.

At £738 million, official reporting suggests the UK spends nearly four times as much on research funded by official development assistance (ODA) than the next largest donor (France) and as much as the next 15 countries combined. On the other hand, total UK R&D spending alone is about £35 billion. And donor finance will be a comparatively small part of overall research finance even if it is successfully focused on developing country priorities: low- and middle-income R&D spending totals $470 billion (although an estimate for low-income countries alone would be closer to $9 billion). Looking at specific priorities, a dated estimate of annual neglected tropical diseases research spending is about $3.2 billion. Solar power attracted $10 billion of R&D spending in 2018.

There is still a considerable role for ODA-funded R&D not least because the primary goal in ODA-funded research spending is (or at least should be) social value for developing countries as a whole rather than private or narrow national good. But the scale issue clarifies why the UK should focus efforts on the research likely to be most significantly under-provided by the market and with the highest potential development impact in the poorest countries.

For technological innovation, this is likely to include technologies that reduce the need for scarce governance capacity and capital to meet public good needs of particular use in developing countries—for example, the off-grid toilet being backed by the Gates Foundation that removes the need for expensive and institutionally complex piped sewage systems, or research into cheap, easily applied, and long-lasting road surface treatments that survive in tropical climates. It might also include low-cost responses to disease conditions concentrated in tropical climates, such as genetically modified mosquitoes.

Not only should the focus of ODA-financed technological research be reasonably specific, the choice of research focus should come before the choice of funding mechanism—which should be selected based on its suitability to the particular challenges involved. There is a role for “push” mechanisms including traditional research grants and product development partnerships as well as testing mechanisms including support for pilots, evaluation, and scale-up, and “pull” mechanisms including prizes and advance market commitments. Given the varied characteristics of different pull and push mechanisms as well as piloting and evaluation, there is not one solution to which approach should be used to incentivize particular research. In some cases, combined push and pull approaches for different parts of the problem will be the best way to deliver an affordable, scaleable technological solution to a specific development challenge

Again, who does the research should be a subsidiary question in the case of technology. Cutting-edge biomedical or road surface advances are likely to involve researchers from the “Global North.” But this does not necessarily imply UK researchers nor does the location of research have to be determined prior to the subject of research being decided.

With regard to policy and institutional research, the importance of local context to successful policy intervention is an argument for orders of magnitude more evaluation involving considerably more capacity to evaluate at the local level. Because of the considerable need for local capacity to deliver locally relevant answers as to what works, UK ODA should support the development of that local capacity to answer priority questions of local policymakers. More broadly, outside bespoke evaluations are unlikely to be a sustainable or affordable model. The UK should rarely fund outside evaluations of programs that are unlikely to be easily replicated at scale or in other regions or countries (in cases where this can be predicted a priori).

In that regard, it is worth noting the very limited global aid support for local research in developing countries. Sub-Saharan Africa outside of South Africa has 56 scientists per million inhabitants (compared to 4,181 per million in the UK) but the system of external financing and enforced “partnering” in aid spending in this area means that research priorities even for many of these scientists are set outside of the continent, where most of the money is also spent. In 2012, 79 percent of research in Southern Africa involved collaboration with external partners, for example. The existing mechanisms for strengthening African research institutions directly are extremely small, amounting to around $2 million per country.

These Lessons Are Not Reflected in the Current Design

Current UK ODA R&D spend is overwhelmingly bilateral and UK based, and a significant portion is allocated based on demand for funding from UK researchers rather than the urgency and tractability of the research topic in developing countries. Forty-five percent of UK R&D ODA is classified for “research/scientific institutions”—an “other” category for sectoral allocation. Sixty-two percent of R&D ODA is allocated to “developing countries, unspecified.”

In particular, the £1.5 billion Global Challenges Research Fund supports UK institutions to address “the problems faced by developing countries, whilst developing our ability to deliver cutting-edge research.” It uses the UK Research Councils to deliver funding. The UK academic incentive structure is not (and should not be) designed to maximize utility of research for development outcomes. But academics learning and writing about developing countries with the focus of reaching academic journals in their field is not an efficient way to deliver improved development outcomes in the world’s poorest countries. Meanwhile the UK’s Newton Fund, designed to promote research capacity by fostering research partnerships between UK researchers and those in developing countries, focuses explicitly on middle-income countries, with a quarter of expenditure in China. This excludes the developing countries most in need of greater R&D capacity.

The UK should consider setting up a commission made up of representatives of developing countries, development organizations, and scientific experts to draw up a list of potential innovations that would (i) ameliorate or solve public policy challenges specific to developing countries, and (ii) require comparatively small additional research and development steps to bring to market.

It would be useful for the UK to have a specific institutional financing mechanism to fund pilots, trials, buyouts, and prizes for where they are an appropriate tool (advance market commitments are likely to be of sufficient size to demand a specific vehicle like the one created by Gavi). An Advanced Research Projects Agency for Development (ARPA-D) within DFID or the new Foreign, Commonwealth and Development Office could provide such a mechanism.

As a rule, ODA-funded technology research should not be patented because it is meant to be focused on global public good provision, not revenues for the (largely) rich-country-based researchers that receive funding. And given the global public good aspect of the research, it makes considerable sense to fund it at the international level as part of a collective exercise. A priority for UK aid should be the creation of an international mechanism to support R&D aimed at public good challenges of specific concern to developing countries.

Because there is a global role to evaluate whether global or at least regional “best practices” are in fact emerging from local research, and because there are intermediate procedures in the middle of the spectrum, there are roles for intermediate approaches. It may be that the broad and significant determinants of cost effectiveness in safety net design, health procedures, or education in different contexts are few enough that a global effort to create country-specific estimates would be far more efficient than individual countries attempting to create the whole evidence base for bespoke country assessments to determine the most efficient way to spend health, education, or welfare funding, for example. Such exercises should be conducted wherever they are most efficiently done. But given that they are not primarily original research endeavours, at the least they could involve a global consortium of research institutions that combine technical expertise as well as local knowledge.

For all that ODA for R&D will necessarily look different from ODA for provision of health services or infrastructure, the general principles regarding aid effectiveness agreed in Accra and Busan still have relevance. As far as is possible, ODA-funded R&D should be transparent, respond to the priorities set by developing countries themselves, and use country systems to deliver on those priorities.