From Audits to Results: A Needed Paradigm Shift in Health Aid

The World Bank’s Africa Health Forum: Finance & Capacity for Results during its 2013 Spring Meetings brought together ministers of finance and of health from 30 African countries in a unique opportunity for mutual listening between countries and partners. One recurring theme in forum and in the first panel was that results-based financing (RBF) – where financing is conditioned on achievement of results in health – is a key approach to driving value for money. In short: RBF = more money for more health. (You can watch the recorded ministerial discussion here.)

The reasons for doing RBF are persuasive, not only for donor agencies but also for countries. Indeed, several ministers in the forum voiced with remarkable consistency their support of RBF – even in countries deemed as ranking low in ‘governance’ or ‘capacity’. By linking payments to specific outcomes, RBF makes a donor more accountable to its constituencies and also increases the mutual accountability between the donor and the country by focusing the contract terms on shared goals and verified results.

The Alphabet Soup of Results-Based Financing:

There are many forms of programs and financing that pay on outcomes. The alphabet soup of acronyms includes at least P4R, PBF, PBR, P4P, FCPR, DIB, SIB, AMC, TrAID+, RBP, RBA, and OBA. While related, these terms are defined and used by different authors differently (see here and here for various definitions). Learn about CGD’s cash-on-delivery (COD) initiative here, which can be seen as a unique form of results-based aid. See also CGD’s value for money initiative here.

In the auditing and accounting paradigm of aid, it has been traditionally thought that donors achieve accountability of its funds through expenditure and receipt tracking – that is, the evidence of receipts and purchases of inputs (e.g. salaries, health commodities, transportation, etc.). This approach often entails large transaction costs for reporting and does not necessarily improve results on shared goals e.g. health outcomes.

Perhaps more worrisome, however, is that this approach lends itself to a kind of unidirectional accountability focused on countries: failure to perform perfectly makes recipients subject to occasionally random decision rules by donors on what is deemed as ‘corruption’ or misuse – and hence a lack of accountability of donors. One could argue that the Global Fund to Fight AIDS, Tuberculosis and Malaria – and the countries it supports – were the victims from the exaggerated ‘badness’ of the small, rare findings made from auditing (see here).

RBF thus represents a means for mutual accountability because it not only ensures accountability to donors of country behavior and performance, but it has the potential to increase accountability to countries of donor behavior and predictability of financing. By linking payments to results in health, RBF can potentially reduce the occasionally random decisions made by donors to stop or start funding, often (but not always) based on accounting paradigm.

On top of that, RBF also promotes accountability of governments to their citizens. By requiring the independent verification of results, RBF encourages governments to do more than boast increases in budgets, and it gives service providers an incentive to show up to work and actually provide services. In short RBF can produce a cascading effect of aligning incentives from the top to the point of care.

But shifting from the ‘auditing and accounting paradigm’ to ‘performance and results paradigm’ presents a number of obstacles, most related to entrenched donor beliefs and practices.  For one, donors are used to defining ‘results’ as receipts or ‘expenditures’ rather than results in health, and judge success by the money they spend rather than the results they buy. Donors too are afraid of audits finding a rare event that in turn would affect their future revenues – and a focus on performance does not deter such audits. Donors can be wary of focusing on results because they feel that they cannot genuinely account for what they contributed, and they fear that by paying for results, countries may be profiting double. Also, many bilateral agencies cannot withstand the uncertainty of making disbursements linked to performance rather than on disbursements made on receipts. These arguments have been presented extensively (and rebutted) before.

The World Bank’s recent Africa Health Forum highlighted that the World Bank has somehow overcome these historical obstacles, and stands to be a trailblazer in RBF. With support from the Norwegian and British governments, the World Bank has supported 17 African countries with national RBF programs or ongoing pilots, and another 15 under advanced planning or discussion through the Health Results Innovation Trust Fund (HRITF) (as well as a handful of countries outside of Africa). While funding channeled through HRITF still represents a small fraction of total World Bank funds, it leverages mainstream IDA financing creatively and signifies an early disruptive innovation. The World Bank is also making it easier for all health sector operations to focus on results payments and dispense with cumbersome input-tracking by using the new Program for Results (P4R) Financing (also see here for recorded discussion on P4R at CGD).

Other donor agencies such as PEPFAR and the Global Fund need to take the courageous steps to a much needed paradigm shift – and potentially learn from, if not build on, HRITF’s effective platform. Learning will ensure that approaches to RBF can evolve and become stronger and more effective. In applying and constantly learning from RBF, donors may even be able to overcome the prevalent forces of ‘paralytic risk aversion’ that have long plagued these bureaucracies. 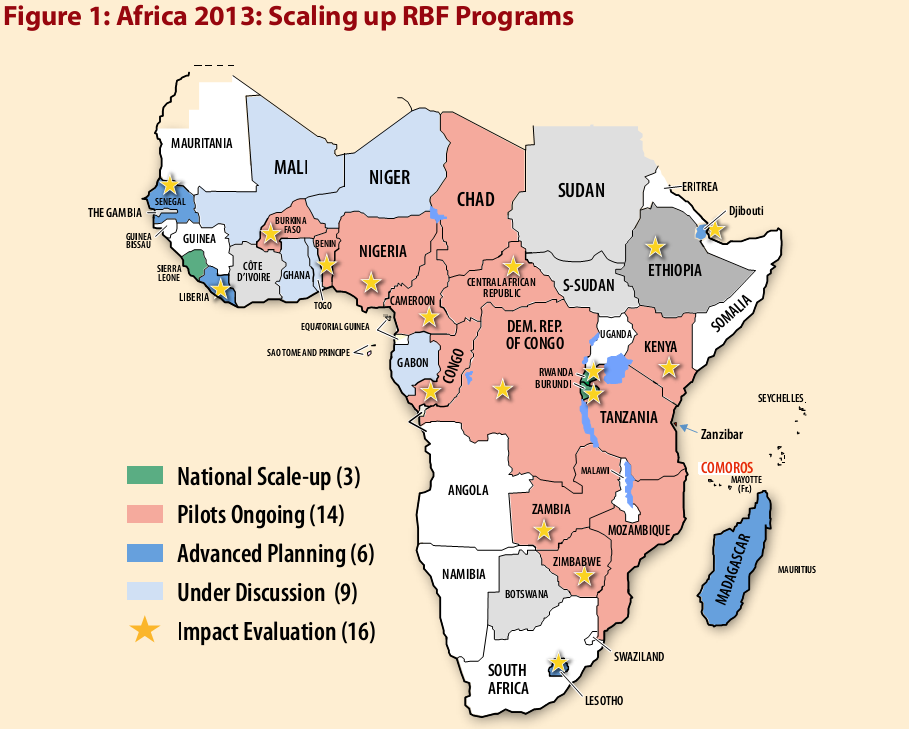 Victoria Fan is a research fellow and Amanda Glassman is senior fellow and director of global health policy at the Center for Global Development. The authors thank Soji Adeyi, Bill Savedoff, Monique Vledder, and Jenny Ottenhoff for excellent comments.

Blog Post
Results, Not Receipts: Tackling Corruption in Development...
Rajesh Mirchandani
What impact does corruption have on development, and what’s the best way to stamp it out? In a new book called Results, Not Receipts, CGD senior fellow Charles Kenny offers a way to strengthen the case for aid and reduce corruption at the same time: focus on outcomes, rather than inputs.