Commitment to Development 2020: Reassessing What Matters Most

Launched in 2003, the Commitment to Development Index (CDI) assesses how larger and wealthier countries’ policies impact the developing world in ways that go beyond just aid. But the most important development issues, and the countries that are influential development actors, are changing. Accordingly, we sought three external and numerous discussions with experts and policy makers to ensure the CDI was up to date and focussed on the key issues for development. So, as we approach the launch of CDI 2020 this spring, we set out the main changes responding to this holistic review.

In this blog, we outline how the remaining G20 countries and other major economies will be incorporated into the CDI, and we look again at the issues and policies that matter most for development, and how to reward efforts focussed on the policies that help the poorest.

The CDI uses quantitative measures to assess the efforts of 27 wealthy (OECD) countries across seven policy areas. While these areas include aid, a key message of the CDI is that development efforts go beyond aid. The CDI has been used by several countries in their development strategies, is routinely used by the OECD in its peer reviews, and often attracts major media attention at its launch. We think that these impacts have nudged countries towards better policies for development. But the things that matter to development—and the number of relevant development actors—is changing. So, after 15 years of producing the CDI, we began a holistic review to assess how it could be updated to reflect the changed world and current development thinking.

The starting point was to hear the views of some esteemed experts within the field. To this end, we commissioned deep-dive reviews from three expert reviewers: Pierre Jacquet, president of the Global Development Network; Stephany Griffith-Jones, financial markets director at the Initiative for Policy Dialogue at Columbia University; and Ravi Kanbur, T.H. Lee Professor of World Affairs, international professor of applied economics, and professor of economics at Cornell University. (Read the reviews from Griffith-Jones, Jacquet, and Kanbur.) We asked the reviewers:

Alongside the reviews, we spoke with a wide range of policymakers (including the DAC and officials in other major economies and in international organisations); experts (including a roundtable last year); and our CGD colleagues (in particular those working on technology, gender, trade and aid). These discussions provided ample ideas and challenges on our own subsequent thinking on revising the CDI.

Here we set out four of the major changes to the CDI. Interested reader can follow the links to the reviews above, and our summary of them here.

The strongest message of the review was that the CDI should capture new development actors—especially China and other G20 members—to reflect both their economic importance and their increased activity in actively promoting development. We therefore added the remaining 10 G20 members to the 27 OECD countries that we already include. We also added the United Arab Emirates (UAE), reflecting its large economy size, high income, and significant reported aid. OECD members are easier for us to add, as their data is more readily available, so we’ve added two (Chile and Israel) whose economies were bigger than existing CDI members (in 2017 data, not shown). The countries which achieve the economic size and wealth combination to be included can be seen in the chart below. The blue dots are existing CDI countries, red are new G20 additions, and green are other countries added. 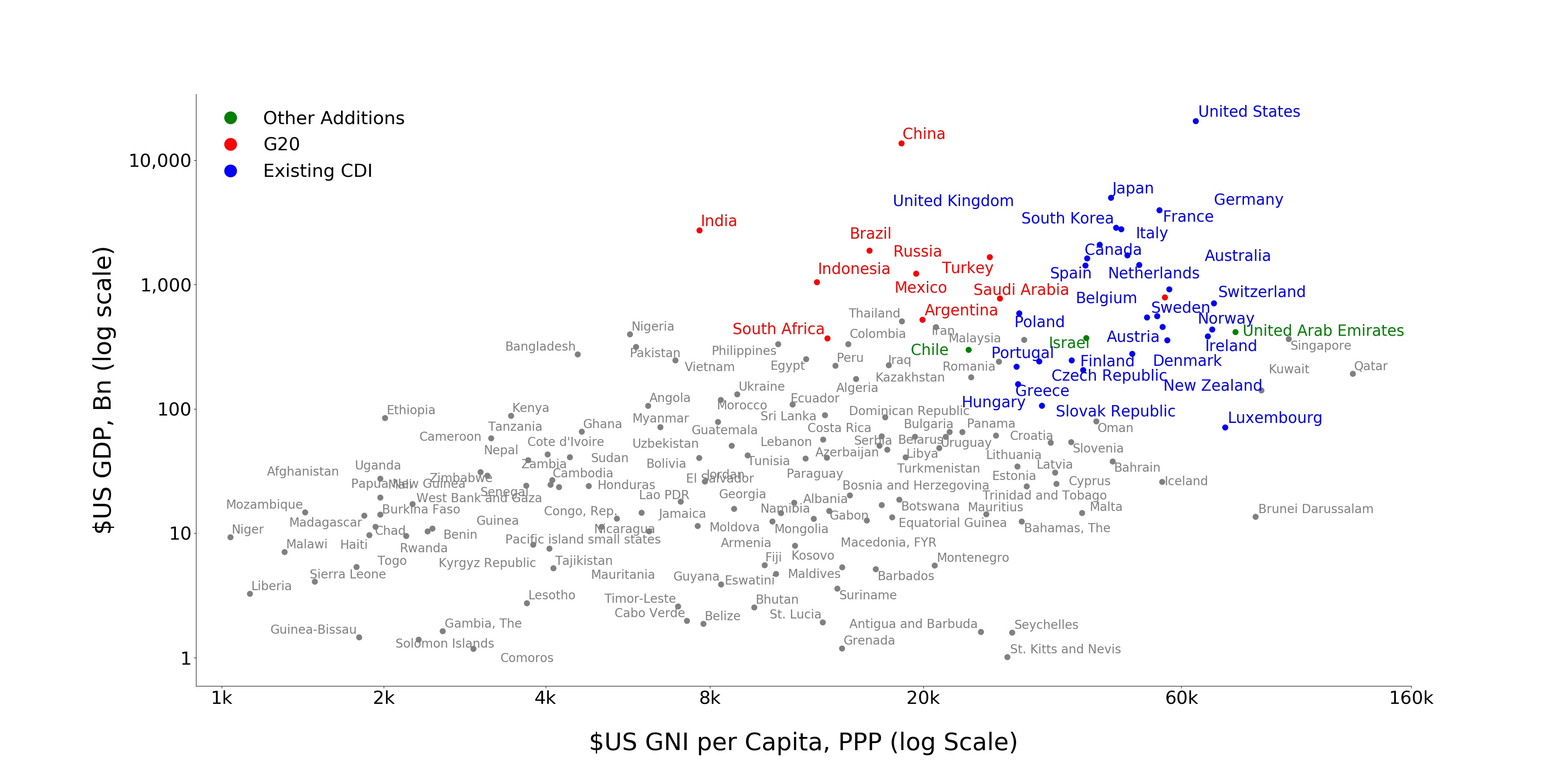 In taking this approach, our coverage spans a wide range of income levels, from India (≈ $7,700) and Indonesia (≈ $13,000), to the United States and Norway with over $60,000. This is because we cannot ignore the development impact of large, lower-income G20 economies in policies on trade, environment, security, and so on, despite their low income.

Still, it’s clear that higher-income countries have greater responsibility, and so we will also calculate income-adjusted results. That is, we will look at the expected score for a given level of country income and see how a country compares to that.

With any index, or any form of abstraction, there is a trade-off between rich and nuanced versus simple and streamlined. A key message from the review papers and discussions is that the CDI had become overly complex and should be simplified, using fewer indicators and showing scores in a more intuitive way.

As well as organising the CDI into three broad themes (see below) we have reduced the number of data points and simplified their weighting in producing overall scores. We have also simplified the presentation of these scores. Previously, we showed the standardized “Z scores.” This is useful: standardizing is necessary to combine data on hugely different scales (e.g., from fractional percents of GNI to tonnes of greenhouse gas). But it is not a great tool for presenting scores in a way that tells a story or is intuitive. For this we have converted the standard scores of each component and subcomponent into percentiles, with the top performer on that measure scoring 100 and the worst, 0.

3) Poverty weighting: Giving credit for policies that benefit the poorest

The CDI has always rewarded countries whose policies benefit poorer countries—but how much credit should a country get for, say, finance to a low-income country relative to a middle-income one? Kanbur’s review delved into the idea of poverty weighting in some detail. While it was open on whether the CDI should continue to use this methodology, the discussions that followed convinced us of its value. The idea is that a policy that benefits another person or country is rewarded more highly if the recipient is poorer. Clearly a person’s welfare is more sensitive to income changes at lower income levels and in economics this is reflected in the idea of diminishing marginal utility of income (for example, see Layard et al. 2008).

We apply this principle to CDI countries’ tariffs, inflows of migrants, inflows of foreign students, and research collaborations with foreign universities. We do so by poverty-weighting efforts in terms of the income level of the benefitting individual or the counterpart country. In accordance with efforts to simplify, and in line with a welfare function of the log of income, the weight is simply the inverse of a country’s income level (measured in GNI per capita). We scale this so that efforts which benefit the average low-income country receive a weight of 1 (and higher for even poorer countries) and falls to around 0.1 for a country with an income per head of $25,000. We will outline this methodology in more detail the main methodology document that will be launch alongside the CDI.

The CDI aims to reflect the policy areas that matter most for development. While the reviewers broadly supported the seven components, we have now grouped them into three overarching themes. Firstly, there is Development Finance, which stands as its own category. This is no longer simply “Aid”; rather, we have developed a forthcoming new measure—Finance for International Development—which is more comparable across traditional and emerging providers (in particular, it includes all concessional loans, and only those that are cross-border). We will also assess the “quality” of that finance, including measures of transparency, poverty-focus, and support for the multilateral system. Then there are Policies on Exchange, covering capital (Investment Component), goods and services (Trade Component), and people (Migration Component). Through investment and trading opportunities, countries can develop their economies, and through opportunities for migration, their citizens can obtain skills, contacts, and capital. Finally, the CDI reflects the growing interest in Global Public Goods (GPGs): resources that benefit all countries. CDI countries are rewarded for contributing to the provision and maintenance of the GPGs of Technology, Environment, and Security.

Despite the overall reduction and simplification, we also include new measures—including several on gender and measures on global health security, research collaboration, and technology in trade—and a more comprehensive approach on climate.

Commitment to Development in 2020 and beyond

The goal of the CDI is to inform debates on what constitutes good development policy and encourage improvements. We hope that these changes will ensure the CDI stays relevant while being useful and easy to understand for its users. We remain open to suggestions for improvements. Look out for the release of the new CDI in the coming months.