The latest news from FORMA demonstrates the power of global and regional economic cycles as drivers of deforestation.  My previous post highlighted the rapid growth and spread of forest clearing during the first phase of the global economic recovery.  Fortunately, new clearing has declined sharply since then, as the chart of FORMA's global indicator shows below.  The effectiveness of forest protection may vary somewhat from quarter to quarter, but not nearly enough to explain such pronounced swings.  They have undoubtedly been generated by the economic forces—product and factor prices, exchange rates, and interest rates—that drive investments in large-scale forest clearing.  I have analyzed their effects on Indonesian forest clearing in a CGD working paper with Dan Hammer, Robin Kraft and Susmita Dasgupta.

Thanks to FORMA, we can now identify aggregate changes in forest clearing that were previously in the domain of speculation.  In the charts below, the left column tracks global and regional indicators and trends, while the right column tracks deviations from trend.  Globally, the latest update still indicates a steeply rising trend in new clearing.  However, it has been accompanied by two pronounced cycles that reflect economic fluctuations since 2005.  At the regional level, these forces have apparently operated with different timing and magnitude.  New clearing has grown rapidly in Asia and Africa since 2005, while it has remained nearly constant in Latin America.  On the other hand, the first cycle around trend is much more pronounced in Latin America.  All three regions exhibit strong second cycles, although the timing is different.  Somewhat remarkably, the Latin American cycle appears to lead the other two by about a year.

These charts, along with our just-published update for CGD's Forest Conservation Performance Rating (fCPR), offer several lessons for forest policymakers as they design and implement REDD+ programs:

Be patient and cautious in judging the effectiveness of new programs

Economic drivers are  powerful, and changes in deforestation over the economic cycle may or may not be in synch with policymakers' expectations.  New programs may seem unduly effective if they are lucky enough to coincide with economic downturns, when deforestation falls anyway.  By the same token, programs that coincide with upswings in economic activity may be judged too harshly.  During a boom, a new program may justifiably be considered successful if new clearing remains constant, or even increases modestly.

Forest monitoring and inspection teams are almost always overstretched, and they may be unable to contain deforestation if the expected profitability of new clearing suddenly jumps.  If incentives for clearing trend upward, REDD+ programs are only likely to succeed if countervailing incentives for conservation also trend upward.

Land conversion for profit is a global enterprise.  Local REDD+ incentives may be sufficient to satisfy local forest proprietors, but proprietors elsewhere may accelerate clearing to take up the resulting slack in global markets.  Our current and previous fCPR reports suggest that local conservation measures have been accompanied by such displacement, both within Brazil and Indonesia, and from those countries to their neighbors.  In addition, forest clearing in Africa has increased sharply as new conservation measures have begun to take hold in Asia and Latin America.

Keep a close eye on developments in Latin America

The forest cycle in Latin America seems to lead other regions by almost a year, for reasons that remain to be determined.  Future research should investigate the effects of regional differences in product mixes, capital markets, and exchange rate policies. 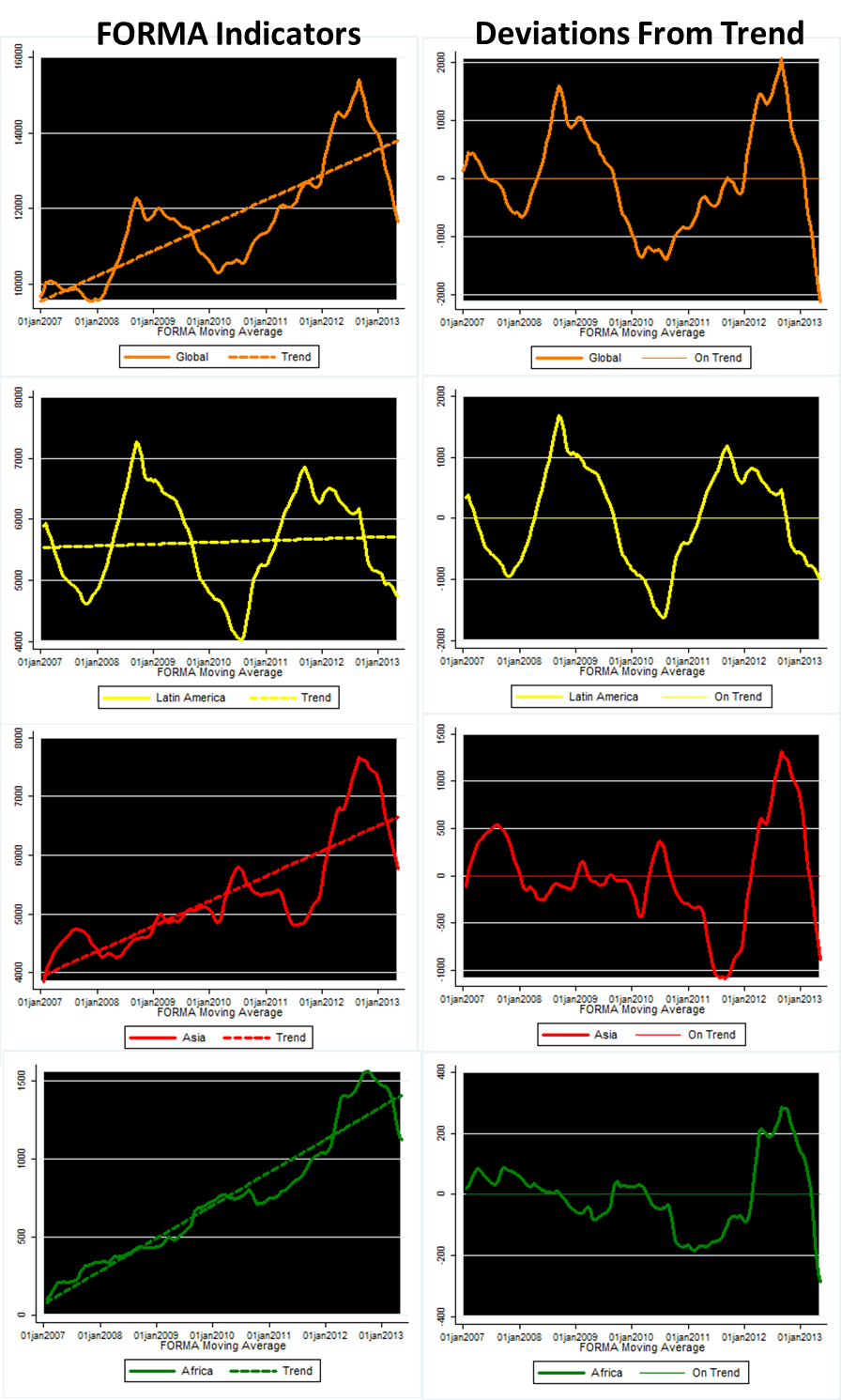 Blog Post
What Should We Ask from the IMF on Climate Change?
Mark Plant

Blog Post
The UK’s Integrated Review: A Most Timely and Promising...
Inge Kaul