How Well Are Performance-Based Payments Working? Lessons from Guyana | Center for Global Development | Ideas to Action Skip to main content

How Well Are Performance-Based Payments Working? Lessons from Guyana

What if international development finance paid for outcomes, like children educated or diseases avoided, rather than inputs like classrooms built or medicines procured?  That’s the premise of CGD’s longstanding work on Cash-on-Delivery Aid.  By paying only for the verified progress on measured outcomes, donors are assured of value for money, and recipients have the flexibility and incentive to innovate.  This idea is taking hold in education, health, and other sectors.

Perhaps in no arena is the Cash-on-Delivery idea further advanced than in tropical forests and climate change, where the concept of rich countries paying poor countries for reducing greenhouse gas emissions from deforestation (REDD+) has gained broad currency since its inception in 2005.  My colleague Frances Seymour has described Cash-on-Delivery Aid and REDD+ as siblings separated at birth.

More than $3 billion has now been committed to performance-based payments for reducing deforestation, through agreements between Norway and Brazil ($1 billion), Guyana ($250 million), Indonesia ($1 billion), Germany’s REDD Early Movers Program, (EUR 56 million) and the Forest Carbon Partnership Facility’s Carbon Fund ($465 million) and BioCarbon Fund ($280 million).  Understanding what’s working and what isn’t in these programs can provide valuable insights for the future expansion of performance-based payment systems in other countries and other sectors, especially if negotiations under the United Nations Framework Convention on Climate Change (UNFCCC) lead to the development of international carbon markets that include tropical forests by 2020.

One of the longest-running of these agreements is in Guyana, a South American country of fewer than a million people where more than 85% of the Kansas-sized land is covered in lush rainforest.  In 2009, Guyana created a Low Carbon Development Strategy to develop economically while keeping its entire forest intact, and signed a Memorandum of Understanding with Norway under which it would receive annual performance-based payments in the tens of millions of dollars in return for continuing to keep nationwide deforestation at a near-zero rate. 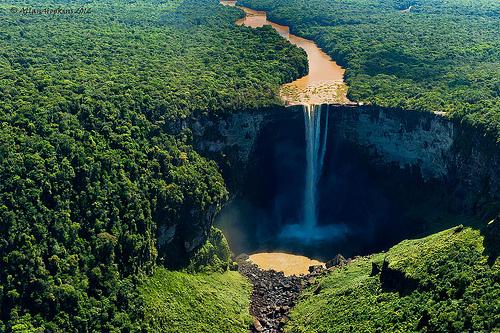 So, how well are performance-based payments working?  Nancy Birdsall and I set out to find out last month by visiting Guyana.  Returning to the pleasant tropical breezes of Georgetown, Guyana’s capital, felt a bit like a homecoming to me, as I had been seconded to the Office of former President Bharat Jagdeo for six weeks during 2009 while Guyana was developing the Low Carbon Development Strategy and the pay-for-performance agreement with Norway (an experience I wrote about here). Nancy and I had conversations with twenty-five experts, including President Donald Ramotar, about how the agreement has been working since then.

We found some noteworthy successes.  The performance-based payment system has functioned as designed: Guyana has built an excellent national system for monitoring deforestation, and Guyana’s continued low rates of deforestation are being assessed relative to a reference level that is appropriate for a country with high forest cover and low deforestation rates.  Three tranches of performance-based payments of about $115M have been approved, of which about $65M has been delivered.  Payments have been lower in years when deforestation emissions are higher, consistent with a credible contingent payment system.  Furthermore, buy-in for the principles of the Low Carbon Development Strategy is broadly shared, and some notable strengthening of institutions of forest governance has taken place.

However, we found some worrisome developments as well.  The agreement was designed so that money from Norway passes through an entity called the Guyanese REDD+ Investment Fund (the GRIF) to finance programs and projects in support of low-carbon development in Guyana.  But the delivery of money from the GRIF to planned spending in Guyana has been painfully slow, putting at risk local support for forest preservation in the face of growing commercial pressures to increase deforestation for gold mining and logging.  The World Bank and the Inter-American Development Bank had been brought in as “partner entities” in executing specific projects in large part to ensure compliance with standard fiduciary, social and environmental safeguards. But the banks’ concerns about procurement processes in Guyana have delayed money from flowing to projects, and their focus on compliance may have eclipsed these institutions’ potential contribution to broader policy and program ideas for tackling deforestation.

Based on what we saw in Guyana, we have several ideas on how partners to the payment-for-performance agreement could get benefits flowing more quickly, at least for some activities:

In the larger context, it would help to have the Organization for Economic Cooperation and Development (OECD) and the new Global Partnership for Development Cooperation recognize the distinction between traditional official development assistance (ODA) and transfers in support of global public goods (GPGs).  With ODA, taxpayers justifiably seek assurance that their money is used well and does not directly or indirectly cause harm.  With transfers for GPGs, buyers would pay for the verified delivery of a service.  As long as the service is delivered, the service provider would then have complete discretion in how funds are deployed.  Such a distinction would greatly facilitate the inclusion of REDD+ in a post-2020 global climate agreement.

Our visit to Guyana was part of a broader program of CGD studies to assess how well performance-based payment agreements for forest conservation are working in Brazil, Guyana and Indonesia, and to attribute changes in forest management to the promise of payments.  This research will feed in to an upcoming report entitled Why Forests, Why Now? and a CGD Working Group on Performance-Based Payments to Reduce Deforestation: Getting to Scale.  Stay tuned!