Yes, China’s Lending Is a Problem for Debt-Vulnerable Countries | Center for Global Development | Ideas to Action Skip to main content

An analysis by the IMF suggests that China’s lending has become a particular problem in countries already vulnerable to debt distress. The highly politicized charges of “debt trap diplomacy” coming from the United States this year have led to counter charges that the role of China’s lending is greatly exaggerated in relation to other sources of financing for developing economies.

This is what makes the IMF data so interesting. For low income developing countries (LIDCs) as a whole, China’s role as creditor is modest, at least in relation to other groups of creditors (more on that in a minute). But for a sub-group of countries—those that have historically been vulnerable to debt crises and are showing renewed signs of vulnerability—China’s role is much larger. The group of eight vulnerable countries identified by the IMF had received debt forgiveness a number of years ago under the Heavily-Indebted Poor Country (HIPC) initiative, but are once again at high risk of debt distress. 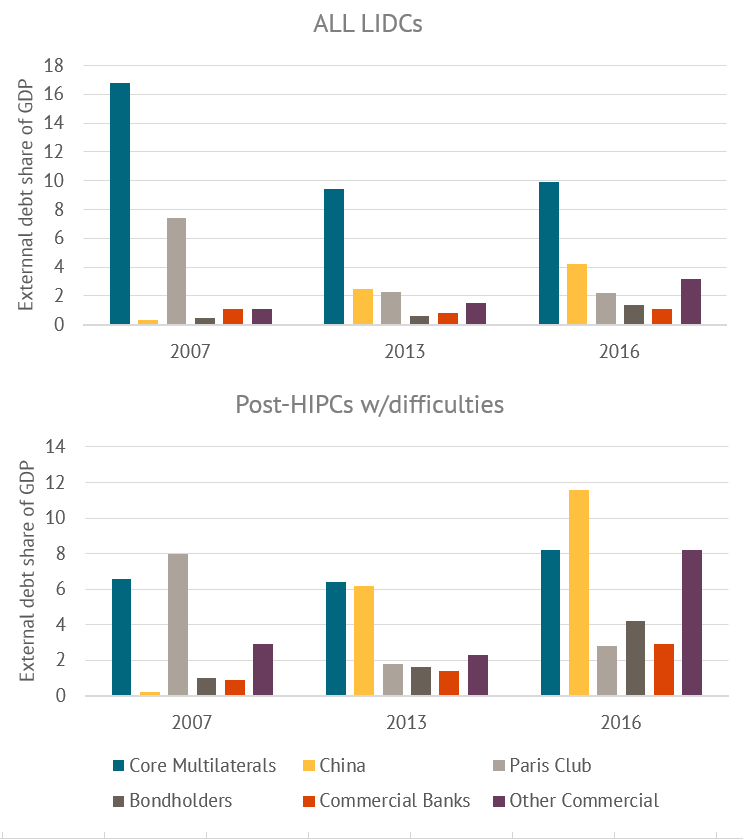 It is in these “post-HIPC” countries where China’s role as creditor has increased dramatically. This is particularly true when we consider that these data are comparing China as a single official creditor to categories of other creditors (multilaterals, bond holders, Paris Club). From this standpoint, China is almost certainly the largest single external creditor for all low-income countries, and its role is even more pronounced in the debt vulnerable countries.

The rapid growth in Chinese (and private) credit in the midst of rising debt vulnerabilities is itself a reflection of the standards that constrain other official creditors like the multilaterals and the Paris Club, and the absence of those constraints for China. For debt vulnerable countries, multilateral lenders like the World Bank adjust their terms in favor of highly concessional loans and grants in these situations and Paris Club lenders limit their overall lending. Commercial lenders face market-based disciplines on their lending, namely the difficulty of getting repaid in the event of a default.