Aid and the Protection of the Global Commons 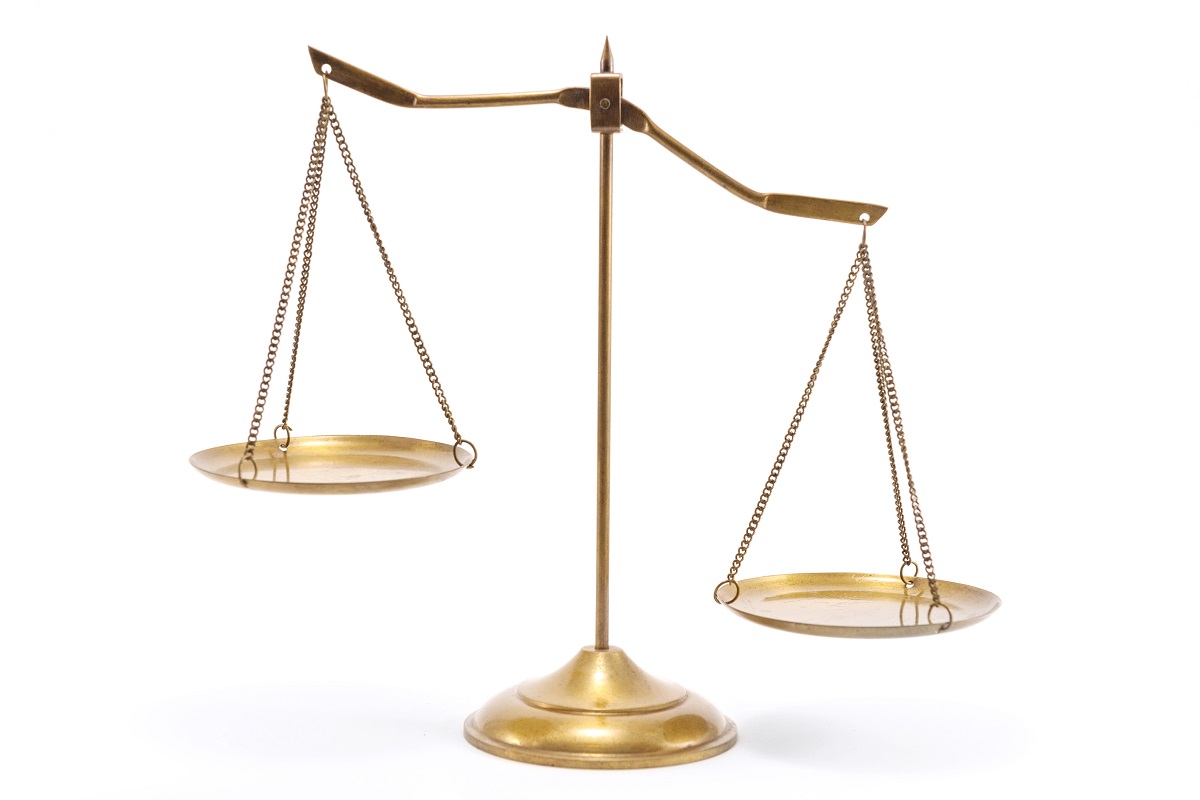 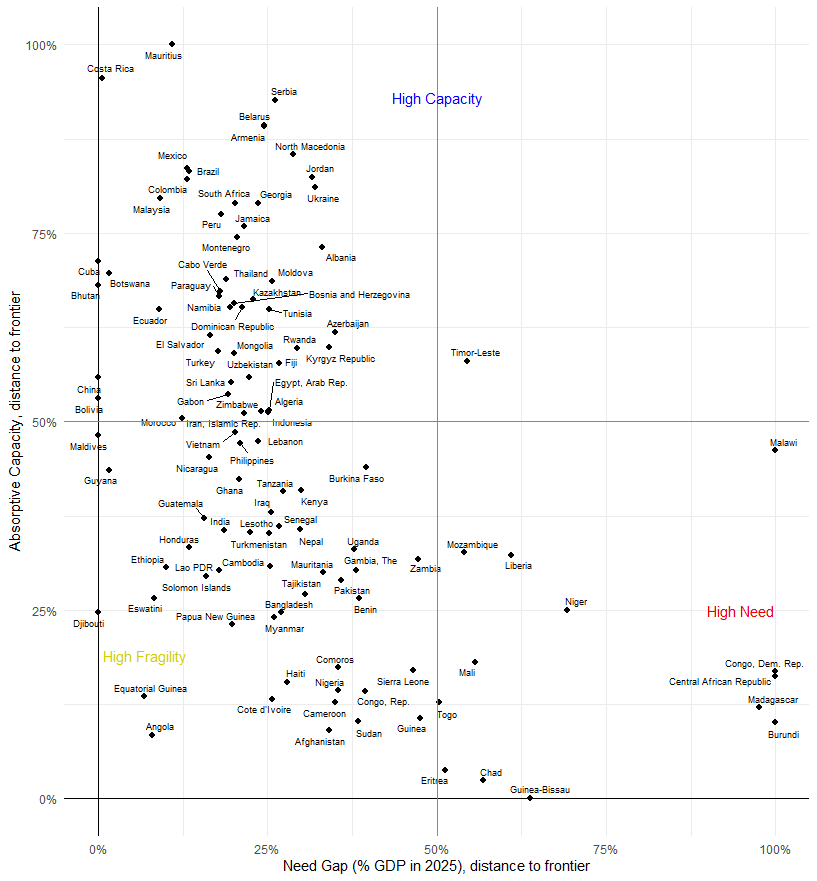 In 1959, then-Senator John F. Kennedy (JFK) famously said during his presidential campaign, “When written in Chinese, the word "crisis" is composed of two characters—one represents danger and one represents opportunity.” This quickly became a popular political and management meme, echoed by Al Gore in the context of climate change and relevant to today’s COVID-19 crisis.

The actual Chinese word for crisis is made up of two characters (危机) meaning, approximately, dangerous + change point (itself part of another two-character word, meaning opportunity). We make this distinction not to nitpick JFK’s inspired imagery, but to highlight that 2020 is also ending on a likely inflection point, for the pandemic and perhaps also for climate change. The moment may present a major opportunity, but we are still in danger.

In the arena of development cooperation, an obvious opportunity is to use 2021, with its apparent convergence of interests between the incoming Biden administration and the COP26 climate conference in Glasgow, co-hosted by the UK and Italy, to launch major new commitments on climate change action and finance. An element of potential danger is that this funding, particularly public funding on soft terms, potentially detracts from other forms of development aid, which are also badly needed at country level but offer fewer indirect benefits to aid providers, like education or social protection. How serious is this risk, and how best to resolve it?

In a paper published this week we look at the evolving motivations for development assistance, symbolised in the figure below: 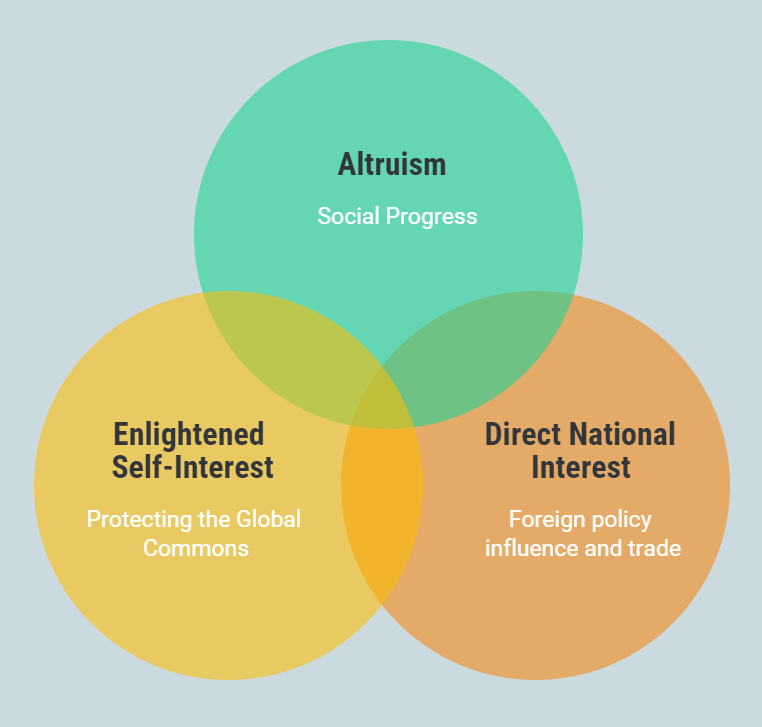 In this framework, we suggest that COVID-19 has melded the traditional solidarity motive for aid, and more recently direct national commercial and foreign policy interests, with a reinforced common-survival, or global-commons motivation.

Oversimplifying, the aid industry’s centre of gravity has first migrated downward and right-ish (towards national interest) from its earlier position in the top Venn circle, and is now shifting leftward (towards enlightened self-interest). Different aid providers find themselves at different points in this trajectory, of course. The top and left-hand circles also offer more spaces where they can legitimately collaborate, compared to the right-hand circle, where direct national interests compete. For example, China might be prepared to work with others, like the EU, on global programs for food, climate, biodiversity, and health. (China has recently committed to net-zero carbon emissions by 2060).

Financing that advances the objectives listed in at least two of the three circles (social progress and protecting the global commons) clearly supports the Sustainable Development Goals (SDGs). So one school of thought is that development aid definitions should also include all global-commons spending, which is not how current aid definitions stand. There is some merit in this proposal, primarily justified by the spill over benefits to humanity at large of, for instance, climate change mitigation investments and pandemic surveillance.

Methodologies have been developed in the context of the Paris (Climate) Agreement to count such finance. Importantly, much of it may not count as aid at all, because it includes the harder-terms financing extended by multilateral banks, export credit agencies and mobilized private finance. Indeed, OECD reports suggest that well over half of climate finance has not been in the form of aid. But aid may be important in facilitating these flows, for example by underpinning multilateral banks with equity and guarantees.

Perhaps one way forward would be to introduce a separate tier for aid in support of the global commons, over and above the UN’s 0.7 percent target for development. This was, after all, the basic premise behind the Paris Agreement to provide $100 billion per year in “new and additional financial resources” for climate. Similar “new and additional” aid will likely be required for other global commons including pandemic surveillance and biodiversity.

A frank recognition of the mix and changing motives for aid also shapes what we now mean by development effectiveness. For example, addressing global and regional threats needs the active engagement of middle-income countries and points to different cross-country aid allocation principles, more about “gradation” than “graduation,” a point that has also been underlined by the ethical issues around access to affordable vaccines and treatment for COVID-19.

Ultimately, it is important not to confuse success on headline financing metrics (as in, hitting a new target beyond 0.7 percent) with success in combating the global and regional threats themselves. Supportive non-aid policies can greatly reduce the need for aid, and vice versa. At the same time as the World Health Organization is encouraging countries to contribute to its new fund (ACT-A) to subsidize tests, treatment and vaccines to combat COVID-19, the World Trade Organization is debating whether its intellectual property rights regime causes excessive price spikes in key medical supplies for developing countries. Developed countries oppose the remedy of granting an exemption to the regime. If they prevail, the cost of achieving global health goals may go up, logically requiring more funding for ACT-A. If developing countries prevail, the reverse may come true.

We should therefore encourage intentional financial support to developing and emerging countries for investments to meet the challenges laid out in the SDGs “for people and planet,” but with a keen eye on whether the challenges are being met or not. As additional challenges mount, including management of the global commons, so will claims on aid, so the danger of shoe-horning global commons grants into the confines of the 0.7 percent  target, without recognizing the scale of financing that is needed, is very real. Yet there is also an opportunity, if sustainable development can be elevated to the “whatever it takes” club of urgent priorities. Maybe the pandemic gives a nudge in that direction.