Delegates from hundreds of countries are in Lima, Peru, this week, facing the heroic task of negotiating a global climate deal under the auspices of the United Nations.

As negotiations reach their climactic closing hours, it’s worth reflecting on a different set of climate heroes: the satellites and airplanes that monitor the state of the world’s forests, and the scientists that keep them flying.

In a new CGD-commissioned working paper, Dr. Scott Goetz of the Woods Hole Research Center and colleagues describe the current state of technology for monitoring forests and how this technology can be put to use in service of international efforts to reduce climate-changing emissions from deforestation and forest degradation (REDD+).

The story told by the working paper is rosy, if highly technical. (Picture a pixelated rose viewed through 3D glasses.) All in all, technological capacity to monitor forests is no longer the barrier to international finance for forests and climate that it was in the 1990s when the Kyoto Protocol was negotiated. Technological capabilities are now sufficient to meet the critical REDD+ needs of measuring, reporting, and verifying emissions (MRV), and setting reference levels (the baseline emissions against which emission reductions are measured). For other areas of importance to REDD+, including safeguards for natural forest and biodiversity, monitoring capabilities are approaching operational in the near term.

Figure 1 below shows the current state of forest monitoring technology—which technologies are available now (green), which will be available within months or years (yellow), which are still in development (orange), and which are unlikely any time soon (red). 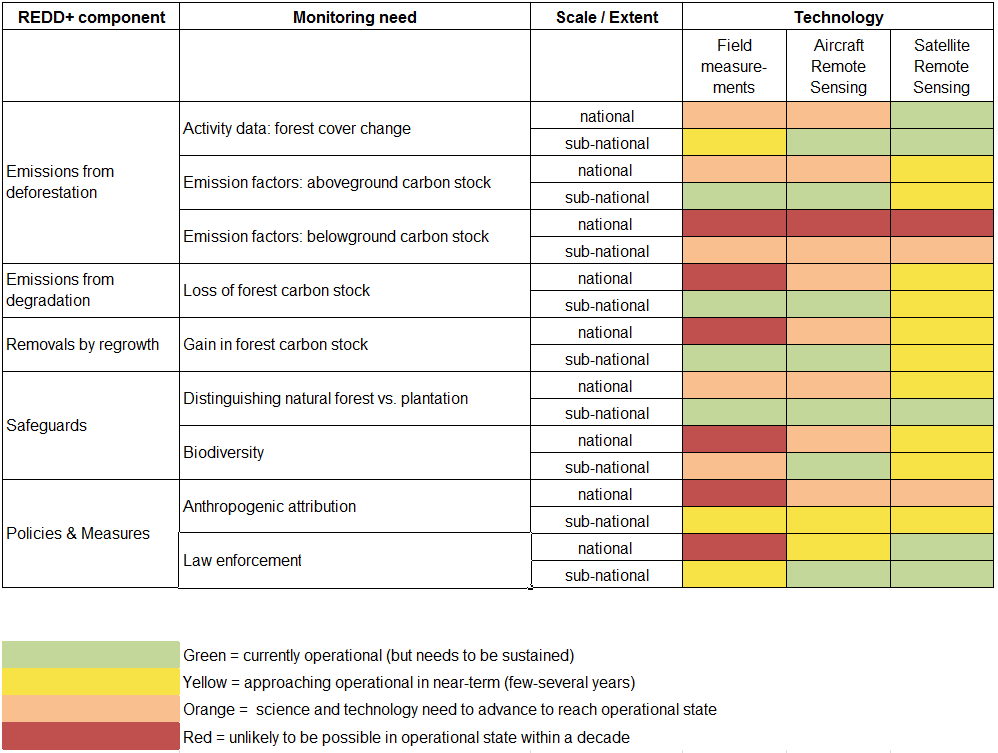 Current forest monitoring capabilities are astounding, and are improving rapidly

When the first in NASA’s series of Landsat Earth observation satellites was launched in 1972, a single Maryland-sized image took the better part of a day for a researcher to interpret by hand. An image cost $5000 to acquire in the 1980s. A country the size of Brazil requires thousands of such images to obtain complete cloud-free coverage of its territory. In 2008 the USGS made the entire Landsat archive available for free download. As of 2014, thanks to scientists at the University of Maryland and elsewhere, anyone with a computer can freely download a global map showing areas of forest losses and gains the size of a baseball diamond every year from 2000 to 2012.

In 2012, two research teams from the Jet Propulsion Lab and the Woods Hole Research Center independently mapped the world’s pan-tropical aboveground forest carbon stocks at half-kilometer resolution. Thanks to such analyses, we know that net deforestation is responsible for more than 10 percent of greenhouse gas emissions, and halting and reversing deforestation offers up to 24–30 percent of climate mitigation potential.

These maps of forest carbon stocks are freely available online and are rapidly being improved to cover the whole globe, every year, in finer detail. In 2018, thanks to LIDAR sensors mounted on the International Space Station, it will become possible to directly monitor losses and gains in forest carbon stocks at a resolution smaller than a baseball diamond. (For more on the future direction of remote sensing capabilities, tune in to this session from Lima moderated by my colleague Frances Seymour.) 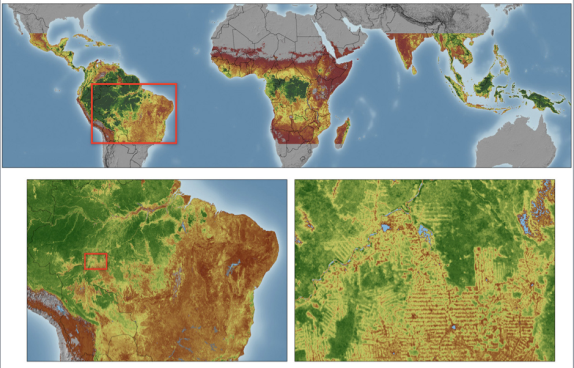 Forest monitoring has been instrumental to effective national policy responses to deforestation in Brazil and elsewhere. From 2004 to 2013 Brazil decreased the rate of Amazon deforestation by nearly 80 percent while increasing soy and cattle production by 65 percent and 21 percent respectively. Brazil’s success would not have been possible without a satellite program called DETER, which sends out alerts of where deforestation is happening across the Amazon every two weeks. This technology allows Brazilian authorities to match illegal clearing to specific landholdings and to enforce forest laws. Economists at the Pontifical Catholic University of Rio de Janeiro figure that deforestation in the Amazon would have been 59 percent higher without the DETER program. Now DETER-like data is available globally through FORMA, a program first developed by David Wheeler at CGD.

In 2009, the governments of Guyana and Norway signed an agreement that Guyana would agree to keep its rate of deforestation at near-zero levels in exchange for up to $250 million from Norway. Thanks to forest monitoring technology, that agreement has been monitored, and respected. Importantly, both Guyana and Norway agreed to keep monitoring simple and move quickly, rather than wait around for technologies that could count every ton of carbon perfectly. Last year Guyana’s deforestation rate fell by 14 percent after several years of growth—a success the government has attributed to the spotlight shined by the monitoring of the pay-for-performance agreement on the deforestation activities of the informal mining sector. 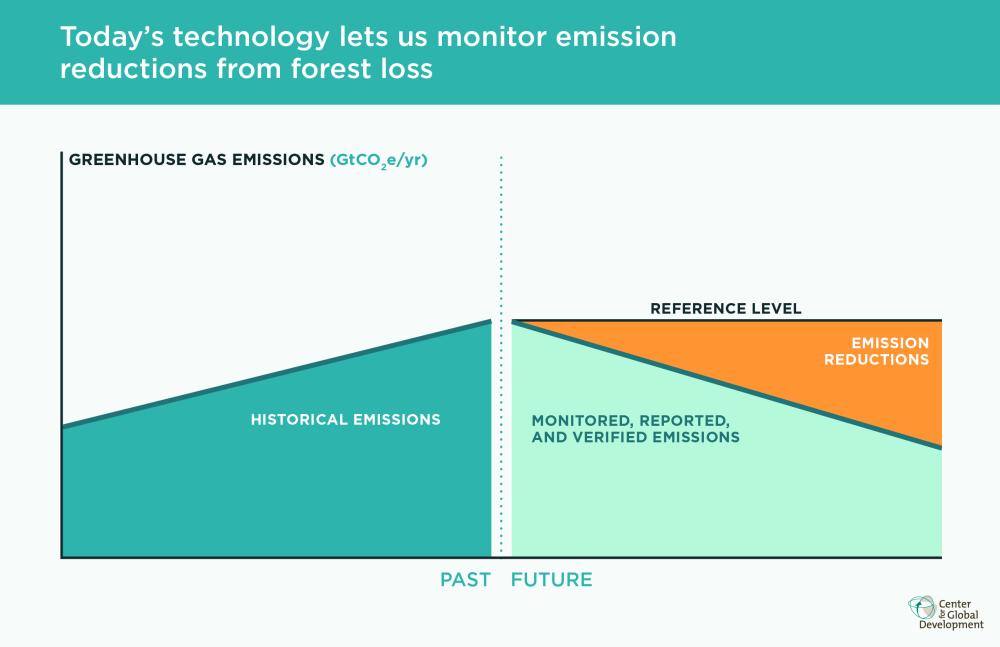 A message to climate and development finance decision makers

The working paper by Dr. Goetz and colleagues isn't meant to be a primer for forest ministries in tropical countries on how to establish forest monitoring systems. There are other reports that do that. Rather, it describes the expanding frontier of current monitoring capacities. The message to climate and development finance decision makers is clear: thanks to rapid advances in our technological capacity to monitor forests, a big barrier to performance-based finance for tropical forests has come tumbling down.