The stakes are high, for both climate and development. If tropical deforestation were its own country its greenhouse gas emissions would rank between the European Union’s and China’s. And forest fires associated with deforestation are responsible for 5 to 10 percent of worldwide premature deaths from air pollution.  So having accurate information about trends in deforestation makes a big difference to a lot of people.

So which is it? Has tropical deforestation been rising or falling?

Let’s start with the first study. Every five years the United Nations Food and Agricultural Organization (FAO) compiles a Global Forest Resources Assessment (FRA) by aggregating official national statistics on forest cover that are self-reported by forest ministries from every country’s national government. The most recent FRA, from 2010, reported that between the 1990s (1990-2000) and the 2000s (2000-2010), the rate of deforestation fell by 37 percent globally and by 25 percent across the humid tropics. This declining trend fed directly into the Intergovernmental Panel on Climate Change (IPCC) assessment that deforestation emissions have been declining over the most recent years. And this data contributed directly to a recent study finding that global emissions from deforestation slowed by 14 percent between the two ten-year periods.

For decades the FRA was the authoritative source for data on worldwide deforestation, so the information it passed along from forest ministries would have been the final word on this matter.  But that’s no longer the case.

In December of 2013 Matt Hansen (University of Maryland) and colleagues analyzed billions of images from NASA’s Landsat satellite, and reported a high-and-rising trend in tropical deforestation annually from 2000 to 2012. Then last week a paper by Do-Hyung Kim and colleagues, also at University of Maryland, looked at forest cover data from the same satellite for 34 countries comprising more than 80 percent of humid tropical forest area. Their analysis showed forest loss going up by 62 percent between the 1990s and the 2000s.

What explains the difference between the self-reported 25 percent decline and the satellite-shown 62 percent increase?

Part of the difference between the studies is definitional. What the FRA calls “deforestation” is different from many peoples’ intuitive sense of the word. Some countries’ reports to the FRA only refer to deforestation when forests are directly replaced by pasture, agriculture, or some other land use. Industrial clear-cuts by logging companies aren’t necessarily counted as deforestation; neither is the conversion of high-carbon, high-biodiversity natural forests to low-carbon monoculture oil palm plantation.  By contrast, the satellite-based analyses count any land that has been stripped bare of trees as forest cover loss.  It’s this loss of forest that matters more when counting climate-changing emissions, since the atmosphere feels the emissions from every burnt tree, regardless of what happens to that land afterward.

A big part of the difference between the two findings is surely explained by data quality as well. The methods used by countries to measure deforestation varied widely across countries, and even within countries over time. Missing data are often extrapolated from previous or subsequent measurements.  And some ministries may have been under pressure to underreport—or overreport—trends of forest loss in their country. (For a scathing academic assessment of the FRA forest cover data, see here).

There’s another big difference between the two data sources, which is transparency.  The Landsat-derived data are freely distributed on the Global Forest Watch platform.  But when it comes to how the national statistics comprising the FRA were generated, the general public are often left guessing.

As good as the satellite data are, they’re not perfect. They don’t yet distinguish natural forests from plantations, and their global formulas mean that they may or may not be as accurate for particular places as locally calibrated analyses. And satellite data show their own discrepancies: between the periods 2000–2005 and 2005–2010, Kim et al. found a 5 percent decrease in gross forest loss in the humid tropics, while Hansen et al found an 18 percent increase in gross forest loss across the tropics as a whole. (The FRA showed an 8 percent humid tropical decrease, a 16 percent tropical increase, and a 15 percent global increase between these two periods.) It appears that the geographical scope makes a big difference to assessments of trends in deforestation, with different trends observed within humid and dry forests.

Tropical deforestation has been going up, not down

Where there’s a divergence between an aggregation of self-reported national statistics and satellite data, it’s an easy call to go with the satellite data. Tropical deforestation has been going up, not down. In the only country with robust satellite evidence of slowing deforestation, Brazil, strong policy intervention and political will were responsible for the drop in deforestation, not happenstance  (notably, Brazil’s homegrown world-class satellite monitoring system also underpinned success).  Elsewhere, strong policies and finance for conserving forests are needed now more than ever.

Advances in monitoring technology underpin the ability to make international performance-based payments, unblock international negotiations and finance, and are tremendously beneficial for forest researchers.  But in spite of these clear benefits, it’s worth remembering how disruptive new data can be to official records keepers. For forest ministries and international institutions that have done yeoman’s service in statistics provision for decades, satellite data presents a new and uncomfortable challenge. These institutions are not used to having their findings contradicted, or facing the burden of proof in explaining discrepancies.

Forest agencies aren’t the first records keepers to have their statistics challenged by independent data. Household surveys have suggested that official statistics on vaccination rates and primary school enrollment may have been systematically overreported across Sub-Saharan Africa. In 2007 best-practice sampling showed that the prevalence of HIV in India was far lower among the general population than UNAIDS had previously inferred from clinic visits by pregnant women. . And public dissemination of data on air quality in Beijing by the U.S. embassy may have prompted the Chinese government to begin publishing more of its own air quality data in 2012.

Let’s hope that the international institutions that we entrust to provide us all with the global public good of accurate information about deforestation can rise to the challenge by modernizing and adapting their methods, rather than just responding defensively to the new sheriff in town. 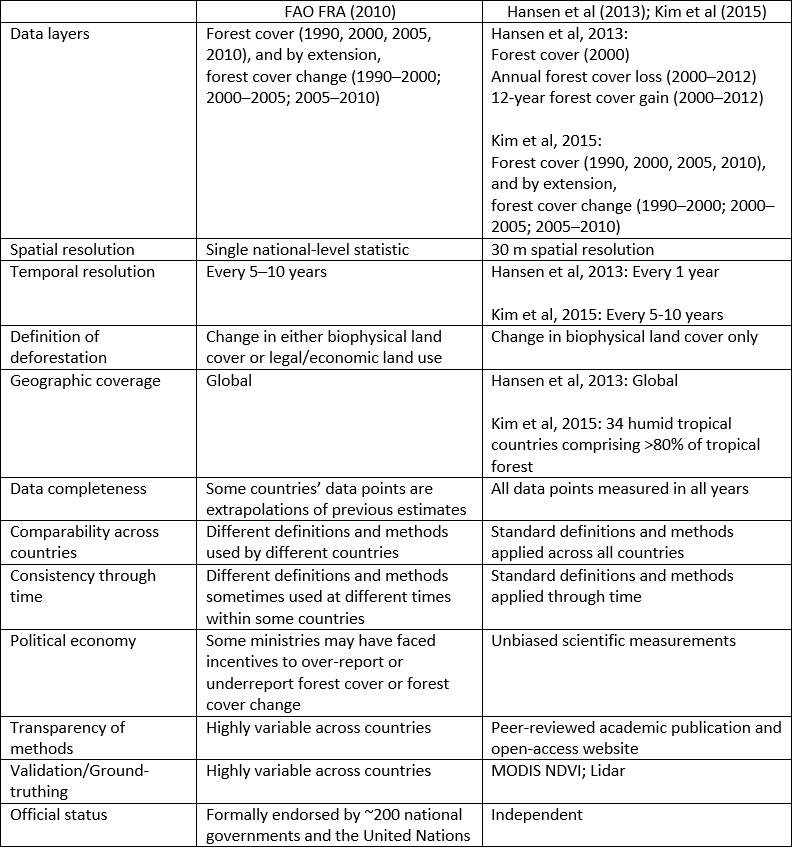