ABCs of the IFIs: The World Bank | Center for Global Development | Ideas to Action Skip to main content

ABCs of the IFIs: The World Bank

The World Bank is a multilateral organization that provides financial and technical assistance to developing countries. As the World Bank’s largest shareholder, the United States maintains a unique influence in shaping its agenda and has a vested interest in ensuring the institution is well managed and appropriately resourced. The US Congress has an important role both in funding US contributions to the World Bank and in overseeing US participation in the institution. Past congressional decisions tied to US funding have led to changes in World Bank policies and institutional reforms.

Several inflection points warrant increased congressional attention to the World Bank. The general capital increase agreement formalized in October 2018—a multilateral commitment to increase contributions from all bank shareholders (including the US) to enable more lending by the bank—is one such point. This agreement requires congressional authorization and the appropriation of new contributions, which will mainly benefit the middle-income and lower-middle income country recipients of the bank’s lending. A second opportunity centers on replenishing the bank’s soft lending window for fiscal years 2021 through 2023, which will primarily benefit low-income countries. The IDA19 pledging session will take place in December, and Congress will be called upon to appropriate funding to enable the US to fulfill its commitment.

The World Bank Group is made up of five entities with complementary roles in promoting global economic development. The International Development Association (IDA) provides grants and low-cost loans to low-income countries. The International Bank for Reconstruction and Development (IBRD) plays a similar role but provides loans to middle-income countries. Select creditworthy low-income countries are eligible for a blend of assistance from IBRD and IDA. To account for the differences in recipient country incomes, IBRD loans typically cost more than IDA loans; however, both offer more favorable terms than private sector lending.

IDA, the World Bank’s soft lending window, provides grants and highly concessional loans (with low interest rates and long repayment periods) to the world’s poorest countries, whose annual per capita incomes fall below an established threshold ($1,145 in FY2019[1]). It is one of the largest sources of development assistance for these countries, most of which are in sub-Saharan Africa. IDA loans are interest-free or offered at below-market rates and have a maximum maturity of 40 years with grace periods ranging from 5 to 10 years.[2]The IBRD is the bank’s hard lending window. It borrows on international capital markets at attractive rates and relends to emerging market economies, charging a slight premium to cover the World Bank’s operating expenses and to generate funds for other purposes, including grants to poorer countries.

The World Bank is owned by 189 member governments.[3] Each member is a shareholder, with the number of shares based roughly on the capital pledged to back up the World Bank’s borrowing on capital markets. This arrangement generally gives proportionally greater decision-making power to nonborrowing and high-income countries. The United States has the largest voting share (see figure 1). Since any change in the bank’s Articles of Agreement requires an 85-percent majority, the United States is the only single member country with veto power over changes to the bank’s structure.

Source: WBG, “A Report to Governors on Shareholding at the Spring Meetings 2018”

Since climate change disproportionally affects populations in the countries served by IDA, who are likely to be more vulnerable to natural disasters and food scarcity, IDA focuses on supporting climate mitigation and adaptation. In Africa and South Asia, there will be an estimated 125 million internal climate migrants by 2050. IDA has encouraged recipient governments to incorporate a climate lens into policy reforms, to reduce emissions and prepare for climate change impacts. 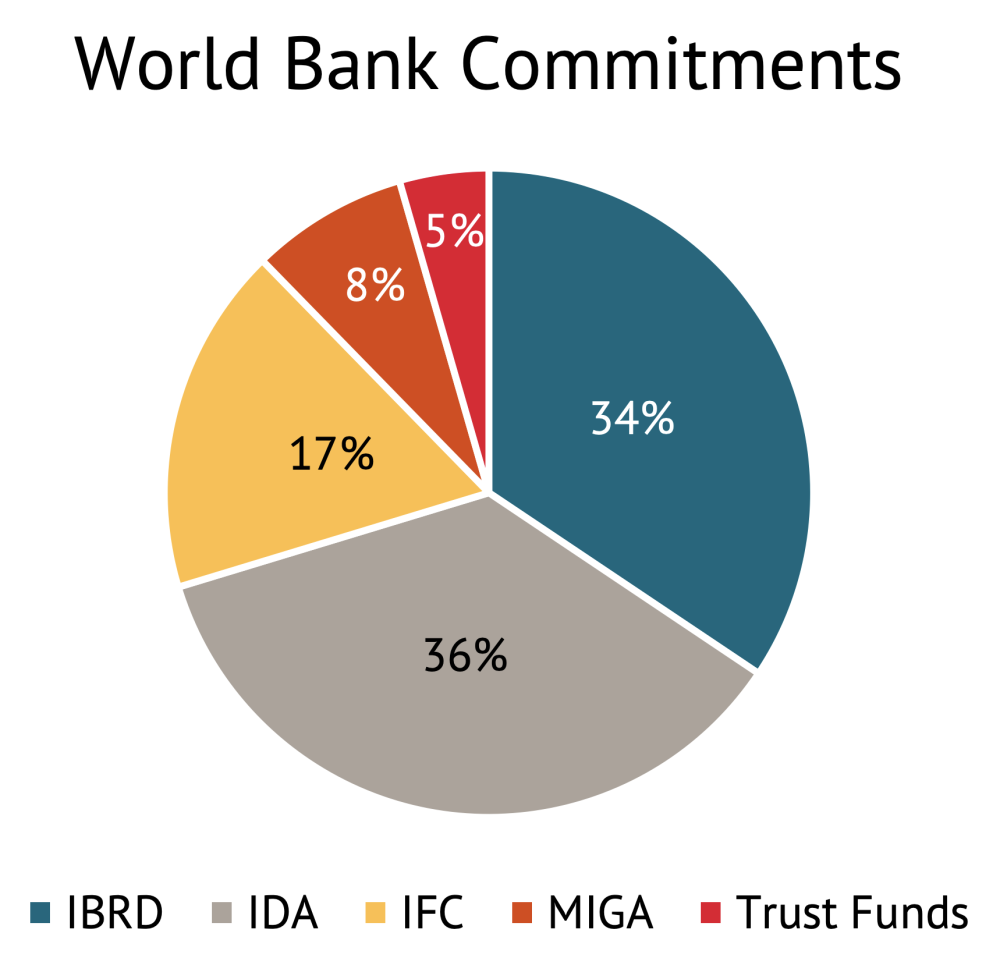 Areas of focus: In FY2018, the sectors receiving the greatest shares of World Bank lending were energy and extractives (15 percent) and public administration (15 percent). While the World Bank lent to 103 countries, African countries borrowed the most, accounting for 35 percent of total lending.[9] In recent years, the World Bank has increased its response to emerging crises with mechanisms to support countries hosting large populations of refugees, to finance efforts to prevent global pandemics, and to mitigate famine.

Increased focus on fragile states: As more countries “graduate” from IDA concessional financing to non-concessional IBRD loans, the remaining nations receiving IDA assistance trend towards fragile and conflict-affected states (FCAS). Increased development funding for these countries aims to support global peace and security, and humanitarian objectives. Since 2016, the most recent round of IDA replenishment funding, the World Bank has doubled resources for FCAS to over $14 billion.[11]

Leadership in addressing climate change: The World Bank Group has committed to assisting borrowing nations with financing, technical assistance, and knowledge sharing to help countries achieve their own climate goals set under the Paris Agreement. Financing in this area has doubled under the bank’s most recent decision to direct $200 billion in the next five years towards climate action projects, primarily in areas of renewable energy and transportation, and $50 billion towards climate adaptation and mitigation projects to protect the world’s most vulnerable populations, by strengthening early warning systems and putting in place community-level disaster risk management plans in the Pacific.[12]

Supporting women entrepreneurs: At the 2017 G20 Summit, the World Bank officially launched the Women Entrepreneurs Finance Initiative (We-Fi) to mobilize over $1 billion to increase access to capital for women-owned small and medium-size businesses in the developing world. We-Fi brings together the strengths of the public and private sector with the goal of lifting thousands of women out of poverty by enabling them to grow their own businesses.

How Is the World Bank Funded?

In November 2018, IDA formally launched its 19th replenishment cycle.[14] Donors from across the globe will meet three times in 2019, culminating in a pledging session in December where they will announce their IDA contributions for the next three years. Any US commitment will require congressional appropriations. Country representatives will consider several development priorities during the IDA19 discussions, including the role that IDA should play in responding to increasing debt vulnerabilities in low-income countries.[15]

Figure 3. Where does IDA get its money?

The IBRD leverages the capital provided by the United States and other shareholders by issuing bonds in the bond markets; the proceeds enable the IBRD to lend to its client countries, which are creditworthy and largely middle-income. These countries, in turn, provide funding to the IBRD in the form of loan repayments, which fund administrative expenses, contribute to the capital base, and subsidize IDA. This “leverage” model has enabled shareholder capital contributions of $16.5 billion[16] (of which, the United States has contributed about $2.9 billion)[17] to support $681.3 billion in lending since 1947.[18]

Because original shareholder contributions can be leveraged in this way, the World Bank does not require frequent replenishment of its capital base. But periodically, the World Bank will issue additional shares to country shareholders, known as a general capital increase. The United States and other World Bank shareholders have purchased shares in the IBRD five times since its creation in 1944. Most recently, in April 2018, the United States and other World Bank shareholders agreed to a capital increase for the IBRD (along with a capital increase for the IFC). The final deal involved policy measures aimed at strengthening the World Bank’s capacity to fight poverty across different dimensions, including reforms to lending rules that will require certain borrowers to pay more and targets to reduce lending to countries above a per capita income threshold. Congress will need to provide authorization and funding to allow the administration to deliver on its promise under the agreement.

[10] Global Concessional Financing Facility, “About Us”